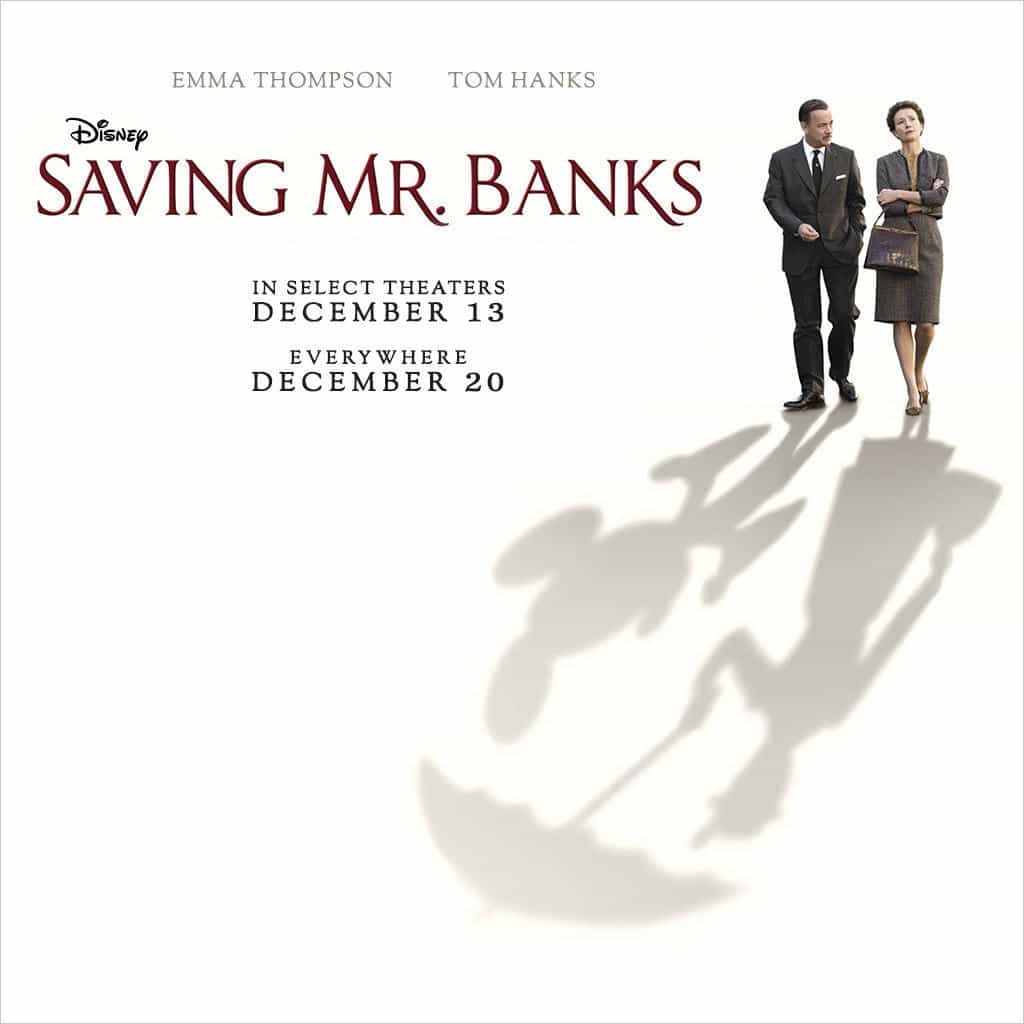 Sorry to disappoint the many Walt fanboys waiting with bated breath, but Saving Mr. Banks is hardly the Walt Disney-focused or Disneyland-heavy movie that so many people were hoping for. Instead, it is a well told, brilliantly acted character piece that just happens to feature Tom Hanks in the role of Walt as a supporting character. Liberties are taken with the story and Disney history. While this review will try to avoid specifics, historical dramas have built in spoilers. The boat sank, the Nazis lost, and Mary Poppins got produced.

The movie alternates between P.L. Travers’ youth in turn-of-the-century Australia and 1960s London and Los Angeles. The flashback format works well in keeping suspense for a story where we know the ultimate outcome. The 1900s thread of the story follows the young Travers (Annie Rose Buckley) and her family as they move to a frontier town, where her father (Colin Farrell) is starting a new job at a bank. The flashbacks are from the young Travers’ perspective, and they focus on her relationship with her father. As we’re introduced to them, their relationship is strong and warm, and we are left wondering how this tight-knit family become the Bankses in Mary Poppins. 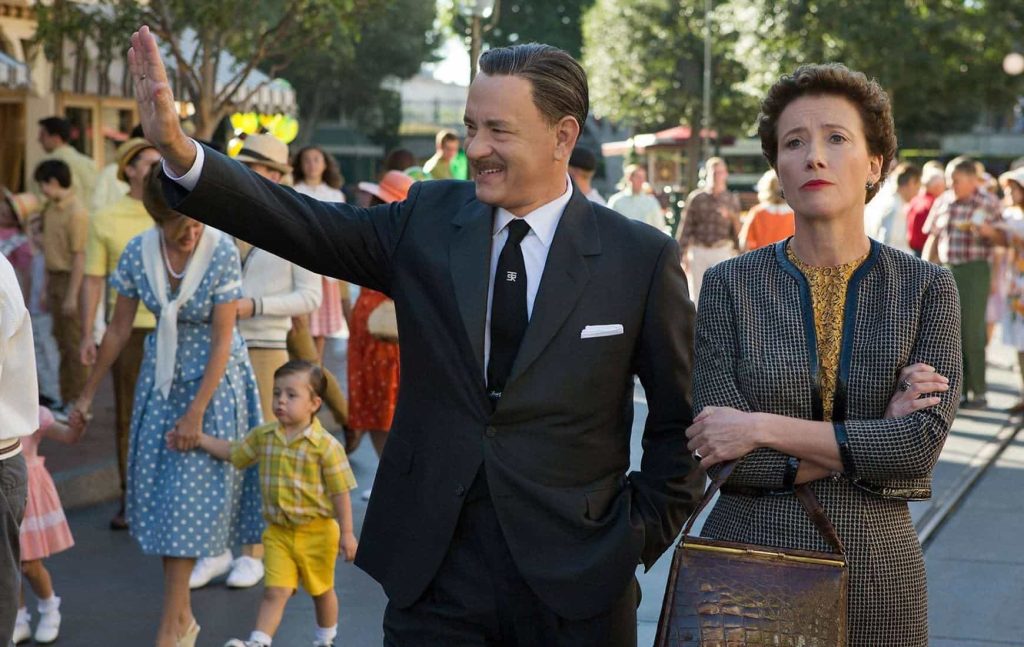 As we switch back to the present, the adult Travers (Emma Thompson) is on her way to L.A. to meet with Walt to discuss signing over the film rights to her books. When we’re introduced to the adult Travers, she is so adamant that the deal will never happen that she’s cancelled her cab to the airport. Convinced she needs the money, though, Travers makes the almost farcical journey. Portrayed as an uptight English stereotype, Travers struggles with the cultural differences of the less formal Hollywood, Walt Disney in particular. The film mines the joke of how the two characters address each other, but never takes it too far.

In L.A., Travers meets a cast of characters including her driver (Paul Giamati), the songwriting Sherman brothers (B.J. Novak and Jason Schwartzman) and Don DaGradi (Bradley Whitford), the screenwriter. Along with Hanks, these excellent performances help tell the story of the collaborative development of the script and songs. However, all of this is just a vehicle to help us discover that the real purpose and inspiration behind the original books was simply a coping mechanism for Travers, which we see play out in the Australian timeline. 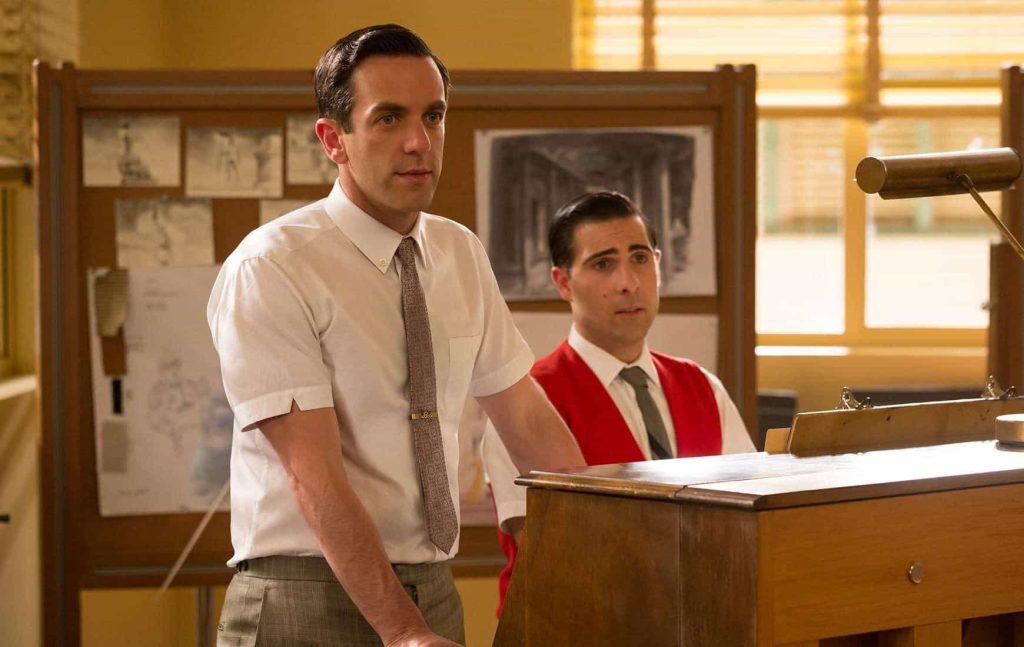 This dual story is played out in two conflicts: Walt versus Travers and Travers versus herself. Of course, with good storytelling the solutions to these disparate conflicts are actually intertwined, as Walt’s attempts to understand Travers’ protectionist attitude cause the author to examine it herself. The much-anticipated Disneyland scene is part of this. Walt tries to coax Travers into a childhood-like state, which is something she appears to have long buried.

In truth, the best interactions are really between Travers and her driver. This relationship feels the most real and organically developed and will hopefully earn both actors nominations this coming awards season.

Saving Mr. Banks should not be taken as a history text. Despite the fact that history rarely wraps up in the neat little packages films leave behind, the film took other liberties with the timeline as well. References are made to projects and attractions not even conceived at the time. I encourage sticklers to let this go and enjoy the drama unfolding before them. Despite these minor inaccuracies, the movie looks beautiful as a double period piece. The drabness of the outback and the comparative garishness of the 1960s are both evident in the respective scenes. In the film, Disneyland looks as close as the existing version could to what the park looked like in that time period.

Saving Mr. Banks’ strongest asset by far is its acting. The characters all feel human and natural. The story is known and altered for the sake of storytelling, but the movie manages to entertain and enthrall for the entire runtime. It is not necessarily the story of Walt, but it is enough to grab those fans hoping for a closer look at the man behind the magic. I don’t think I can say a higher praise than to call it a docudrama worthy of its subject matter.