Every year since 2008, WDW News Today has hosted a charity drive to raise money for the Toys for Tots Foundation. To date, we have raised over $11,000 for this amazing organization with donations through our website and those made during our annual WDWNT Live! program on Thanksgiving weekend. This year, we will be doing the same with the help of some new sponsors and partners, and we are asking you to be a part of this holiday tradition where we continue Walt Disney’s dream and try to make a difference in  the lives of those less fortunate.

Over 60 years ago, Walt Disney became one of the original sponsors of the Toys for Tots foundation, which ensures that every underprivileged child receives a toy during the holiday season. Walt and his animators personally designed the original Toys for Tots train logo that is still used today and the first poster created for Toys for Tots.

In this spirit, WDW News Today and our many friends and partners are putting on a 25-hour live broadcast this year to raise money for Toys for Tots. We hope you will join us beginning at 8PM ET on November 29, 2013 when the broadcast begins and will help us by making a donation to this great cause at toys.WDWNT.com. 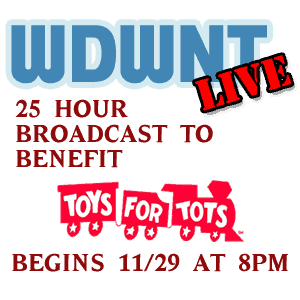 We are proud to announce Theme Park Connection as the official sponsor of this year’s show and charity drive. As part of their sponsorship, they are accepting cash donations in-person at their store and providing prizes for all of the many games that will be played during the course of the live program. A portion of our 25-hour broadcast will also be conducted live from their store on Saturday, November 30th, from 9:00AM until 3:00PM EST. Theme Park Connection can be visited online at ThemeParkConnection.com or at their new store location at 2160 Premier Row in Orlando, Florida, near the Florida Mall.

The choice to do a 25-hour broadcast this year over 24 was not a coincidence. To commemorate the upcoming WDWCelebrations event “Studio 25”, we are matching every year of Disney’s Hollywood Studios with an hour of live broadcasting. Also, during the course of the show, registration will officially open for this fan event at WDWCelebrations.com.

During the course of the show, we will be presenting many of the shows, segments, and games for which we are known:

This entire broadcast will be streamed live on WDWNT.com, accessed by going to the WDWNTunes tab and clicking listen. You can also go directly to WDWNT.com/listen. As well, WDWNTunes streams through several mobile applications available at WDWNT.com/apps.

We hope you will join is for this fun show starting on November 29th at 8PM EST and will donate what you can to Toys for Tots through our FirstGiving fundraising page or in-person at the Theme Park Connection store.