I still remember the mantra of  Horizons – “If we can dream it, we can do it.”  Since its closing  in 1999, many Disney Parks guests have truly missed the Horizons attraction. With its glimpse into 21st century living, “on land, sea and even in outer space,” guests were able to experience visions of the future.

Horizons operated at Epcot from October 1, 1983 to January 9, 1999, and Walt Disney World is now celebrating the 30th Anniversary premiere of the attraction. The Disney Parks online store will offer an exclusive anniversary T-shirt from November 21-25, 2013.

The artwork for this shirt was created by Disney Design Group artist Casey Jones.  His design shows the iconic robot butler along with the attraction’s signature marquee on the front of the shirt. Casey also included the iconic quote, “If we can dream it, we can do it,” which was found just inside the attraction’s entrance. 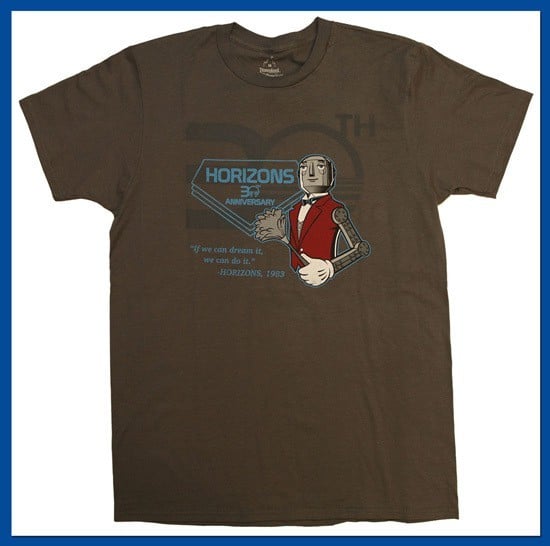 Some guests may remember  “choosing your own flight path back to the FuturePort” at the end of the attraction; the back of the shirt is inspired by this “choose your own” element. Casey decided to feature three different graphics for the back of the shirt – Mesa Verde, Sea Castle Resort and Omega Centauri.

He partnered with Steven Vagnini from the Walt Disney Archives in Burbank, California. The two collaborated to bring these reference images to the shirt design. The front of the shirt will remain the same for each order, but customers can choose the logo they want printed on the back of the shirt.

To order this shirt, starting November 21, please visit www.Disneystore.com/ParkEvents.  All items will ship in 6-8 weeks (express shipping is not available).