It’s only November, but I’m already “thinking Spring.” I miss the warmth of the sunshine and the brilliant colors of leaves and flowers. With that in mind, I’m pleased that Walt Disney World has announced some news on the 21st Annual Epcot International Flower & Garden Festival this week. 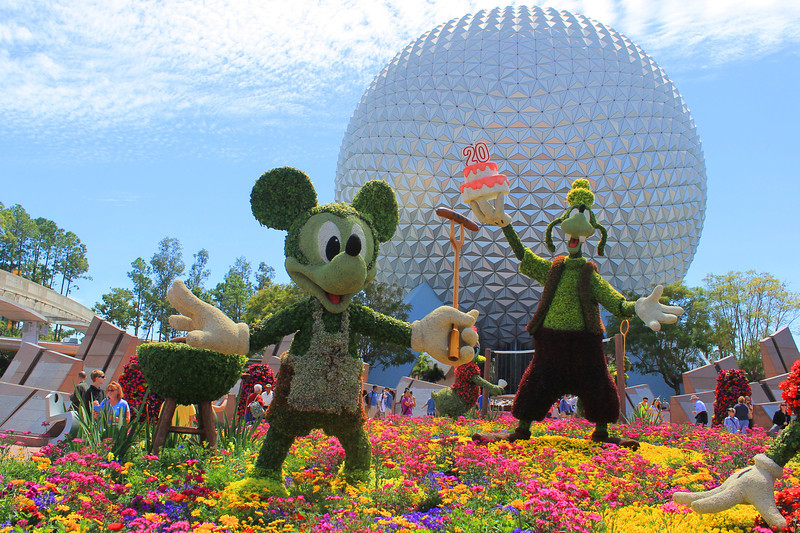 Kermit the Frog, with his blooming banjo, and Miss Piggy will be joining the other artfully-crafted topiaries during the 21st Epcot International Flower & Garden Festival from March 5 – May 18, 2014 at the Walt Disney World Resort.

During the 75 days that Epcot hosts the Annual International Flower and Garden Festival, almost 100 topiaries will adorn the Park, transforming Epcot into a colorful wonderland of gardens and exhibits. The outdoor food and beverage marketplaces will also be back for a second year, offering many tasty treats, both savory and sweet. Perhaps taking a nod from Epcot’s Food and Wine festival, new menu items will include Piggylicious Bacon Cupcakes and a Barbecued Chicken Leg at the Smokehouse Barbecue marketplace. Previous menu favorites, such as the Watermelon Salad with baby arugula, feta cheese, pickled red onions and balsamic reduction, will be back to wow guests. In addition to new menu items, several lemonades, cocktails, wines and beers, all with floral inspirations, will be available to pair with food choices.

Featured topiaries this year will include:

The Flower Power Concert Series welcomes two new acts in 2014:  Gary Lewis and the Playboys (“This Diamond Ring”) March 14-16, and The Alan Parsons Live Project (“Eye in the Sky”) May 16-18.  During opening weekend, the series kicks off at America Gardens Theatre with fan-favorite band, The Guess Who (“American Woman”) March 7-9.  Other pop acts set to perform include Chubby Checker & the Wildcats, The Village People and Paul Revere & The Raiders. (Entertainment is subject to change).

Kids can explore the multiple-themed gardens and children’s play areas, while dozens of Disney-crafted “flower towers,” herb gardens and beds of multi-colored blooms will add to the floral splendor of the park’s landscape will delight adult festival attendees. Disney’s gardeners estimate 70,000 bedding plants will surround the Future World east and west lakes alone.  On the water, 220 mini-gardens will be set afloat.  Several special weekend happenings, including the popular Art in the Garden Weekend, will be scheduled.

The festival, including all gardening programs and exhibits, is included in regular Epcot admission.

Have you been to Epcot’s International Flower & Garden Festival? What are you favorite topiaries?