“Treasures of the Walt Disney Archives” Opens at the Museum of Science and Industry, Chicago 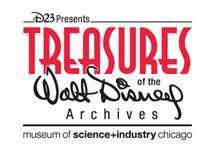 The exhibition encompasses more than 300 artifacts from 90 years of Disney history and showcases the creative innovations and accomplishments of Walt Disney, a native of Chicago. Featuring many artifacts never before widely seen by the public, the exhibition features items such as props, drawings, costumes, artwork from classic Disney animated films, theme park attractions, TV shows, and live-action films, as well as items from contemporary Disney accomplishments.

“Treasures of the Walt Disney Archives showcases the creativity and innovation that has defined Disney for 90 years,” said Robert A. Iger, chairman and CEO, The Walt Disney Company. “We’re proud of this heritage, and we are very pleased to share this rare glimpse into our rich history with Chicago’s world-renowned Museum of Science and Industry.”

Among the extraordinary items to be featured:

“Through this exhibit we’re pleased to showcase Walt Disney as both a master storyteller and innovator whose creative legacy  continues to inspire people of all ages,” said David Mosena, president and CEO of the Museum of Science and Industry, Chicago. “Guests will be immersed in Walt Disney’s ‘can do’ spirit, optimistic outlook and never-ending curiosity that propelled him through his impressive career. This spirit continues to be the creative inspiration behind many of the incredible experiences created by Disney today.”

The exhibition is not included in museum entry and will require an additional timed-entry ticket, which is $9 for adults and seniors and $7 for children 3-11. Tickets are on sale at msichicago.org. MSI members can purchase exhibit tickets for $4.50 per guest. D23 Gold and Silver Members will receive a special discount on exhibit entry.