Gertie the Dinosaur: A History Richer Than Frozen Treats

Gertie the Dinosaur: More Than An Ice Cream Stand 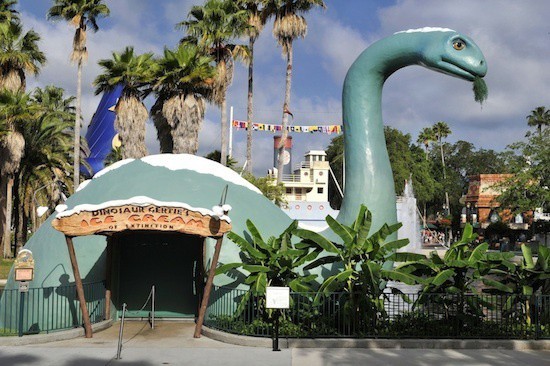 She stands tall and proud in Echo Lake as she munches on a delicious piece of greenery. Guests walk by and look at her with a smile and some even take pictures as they make their way to popular attractions in Disney’s Hollywood Studios. While many people see Gertie every day, most don’t realize who she is or what she represents other than an ice cream stand. Gertie the Dinosaur is the first example of “character” animation and a huge  inspiration to Walt Disney. 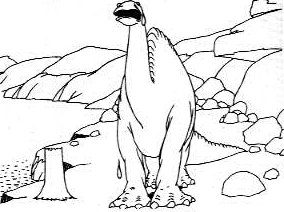 In 1914, cartoon and comic strip artist Winsor McCay of the Cincinnati Commercial Tribune and the Cincinnati Enquirer began working on a new cartoon for his vaudeville act. While this was not his first attempt at animation, this would be the first cartoon he would ever interact with live. Gertie the Dinosaur was a short in which an animated dinosaur would appear on screen and follow the commands of her “master.” McCay would stand by the screen with a whip and have Gertie perform fairly simple tasks such as raising her feet or bowing her head. Gertie even snaps back at her master during the show whereupon she is scolded and begins to cry. Throughout the performance, Gertie faces distractions such as an antagonizing mammoth and a flying lizard.

McCay pioneered many techniques of early animation. The “McCay Split System” required the artist to draw major frames and positions first and add the “in-between” frames later. This helped to improve timing of animation and the technique became widely used by other artists. McCay experimented with registration marks as well. These were marks in the corners of each drawing which would line up and reduce shakiness in the animation. McCay’s animation process for Gertie the Dinosaur has been adapted and improved by many over the years and remains the earliest influence for animators today.

But what really makes Gertie the Dinosaur important  is Gertie’s personality. Gertie was one of the first animated characters to ever have emotions in a cartoon. Earlier cartoons focused heavily on sight gags and cheap laughs rather than the idea of character. Gertie inspired many young animators to experiment with character development. Walt Disney was one of the artists inspired by McCay’s work. Disney kept Gertie in mind as he went on to later create characters like Oswald the Lucky Rabbit and Mickey Mouse.

Walt paid tribute to McCay in a 1955 episode of his “Disneyland” television program called “The Story of the Animated Drawing.” In this segment, McCay’s son Robert and Disney animator Richard Huemer recreated the original Gertie the Dinosaur vaudeville performance and Walt explained the importance of McCay’s contributions to animation and how they essentially founded the industry. During the segment, Walt said, “Winsor McCay’s Gertie and other animation novelties stimulated a great public interest and created a demand for this new medium. This, in turn, encouraged other pioneers to creative efforts that in time, lead to the establishment of the animated cartoon as an industry.” Walt later expressed his gratitude to McCay by saying to McCay’s son in reference to the Disney Studios, “Bob, all this should be your father’s.” Needless to say, Imagineers found a great way to honor Gertie in 1989 during the construction of their third Florida theme park.

Today, Gertie’s Ice Cream of Extinction stands as a larger-than-life tribute to one of animation’s founding artists and characters. We can only hope that Gertie sticks around and doesn’t soon become a character from Pixar’s upcoming project “The Good Dinosaur.”