There has been a lot of talk lately about the new Disability Access Service (DAS) Program coming to Disney Parks to replace the Guest Assistance Cards (GAC). Last week we gave you detailed information about the new DAS system (please read that post first) and received many questions about how the new program would work. Yesterday the new system debuted and we tried out the DAS for ourselves.

We arrived at Magic Kingdom at park open. I was expecting long lines at Guest Relations and wanted to do my best to avoid those (especially since the whole point of the card is to help those who can’t wait in long lines). The outside of the building was swarmed with Guest Relations Cast, managers, and security, but not many guests. Surprisingly there was no wait at all when we got to City Hall and we were able to go right up to a Cast Member. We explained that we were there because we knew the system had changed and we needed a DAS to replace our GAC. The Cast Member asked what type of concerns we had with waiting in standby queues. After explaining our needs the Cast Member said we did qualify for a DAS and pulled out an iPad to issue the card.

The Cast Member collected all the same information as before with the GAC program: name, number in party, dates of visit. A couple of things have already changed since Cast were originally trained. They have capped the party size at 10 (instead of having it be unlimited as they were told in training). However, they are encouraged to keep the party size at 6 or less and if your party is more than 6 people they will need to see everyone to issue you a DAS for that number. Cast were also trained that the new card would be good for a maximum of 7 days. They have since decided to extend that to 14 days. So, the card will be valid for the length of your stay or 14 days if you’re a local or Annual Passholder. If your length of stay is longer than 14 days you will need to get a new DAS after two weeks.

After entering all of my information the Cast Member then used the iPad to take my picture. This picture will appear on the card to ensure that I am the one using it and I can’t give it to someone else. As we said in the previous post, if the card is for a minor a parent can have their photo taken instead. You can also opt to not have any photo on the card, however, if you choose to not have a photo the card will not be valid for multiple days and you will need to get a new one every day of your trip. 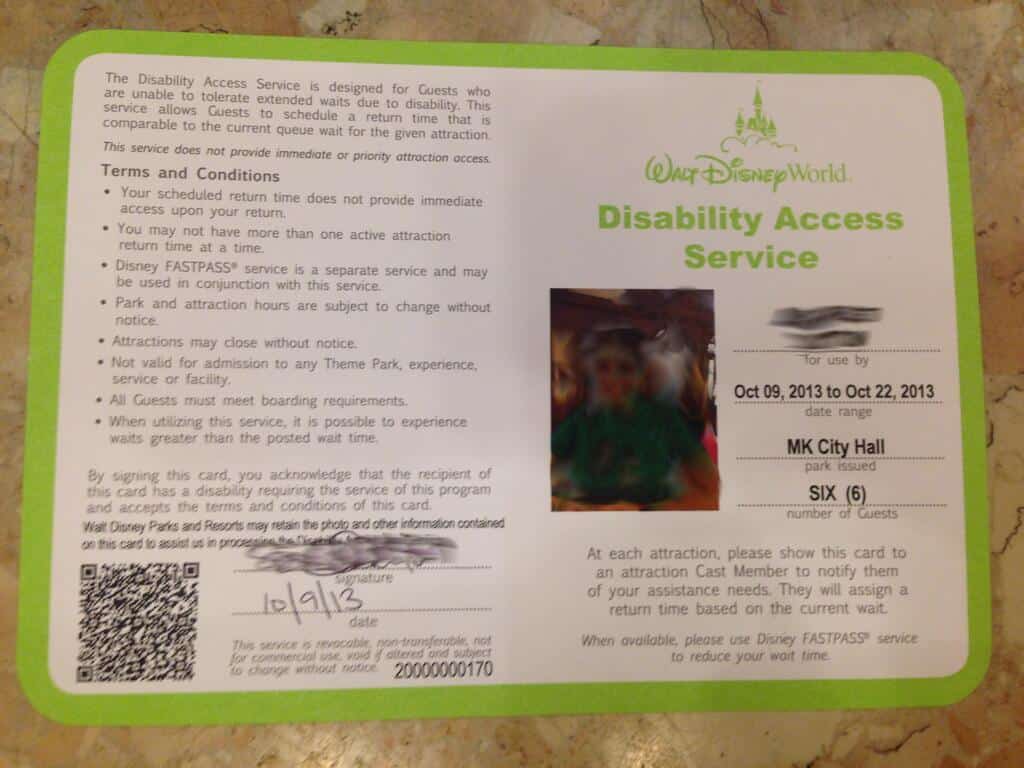 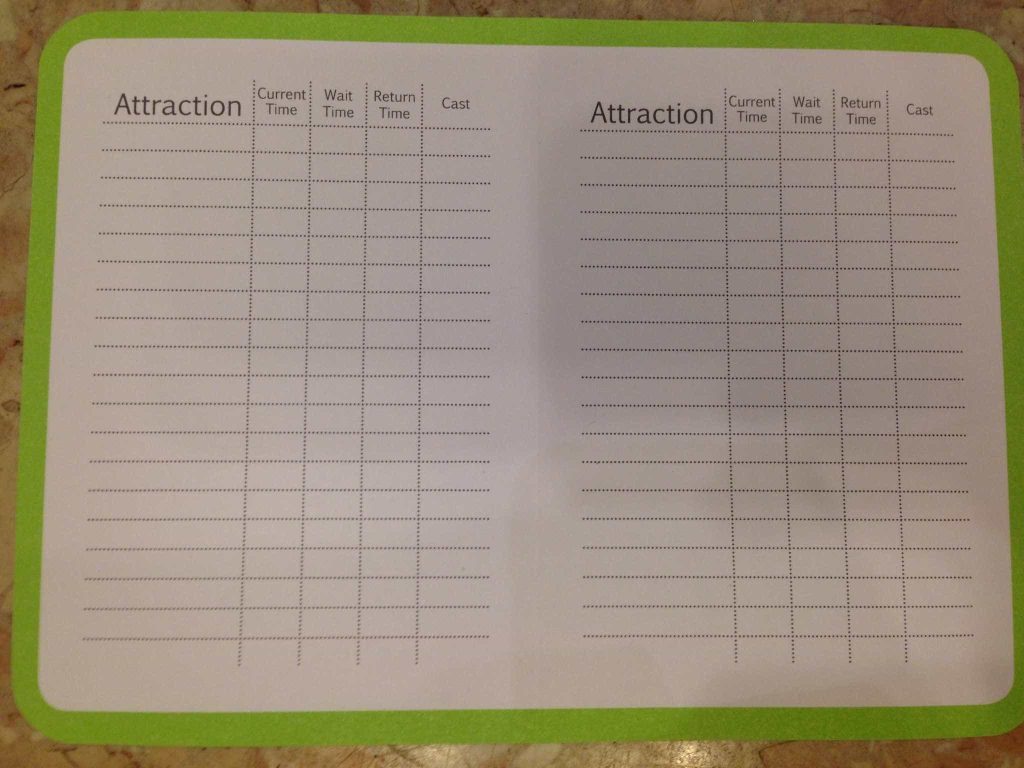 All in all the process of getting the new card took less than 5 minutes. It may take some guests more time, especially if there is a long wait or if they have a lot of questions, but for us, we were ready to try out the new card by 9:05am.

There was only problem…nothing really had a line just after park opening. We headed over to Jungle Cruise where the wait was only 5 minutes. There were several Cast Members at the entrance (including 2 coordinators) and I asked them how the DAS program worked with such a short wait. Since the return times they normally write on the card are 10 minutes less than the posted wait, if the line is less than 10 minutes the guests can go straight in the alternate entrance. In this case, that would be the FASTPASS queue. They said that it would work this way at all attractions.

After grabbing some coffee and breakfast we headed over to Buzz Lightyear. The wait time was 20 minutes so we knew this would be our first return time. Again there were several coordinators at the entrance of the ride and one of them was holding a clip board and pen. We approached him, showed him our card, and he filled it out with a return time and his initials. It was a very quick and simple process. We received a time to come back 10 minutes later. All it took to kill that time was a quick loop on The Peoplemover and then it was time to ride. When we returned to Buzz Lightyear we showed our card with the return time, the Cast Member voided the entry by crossing it out, and we were directed in through the FASTPASS queue. 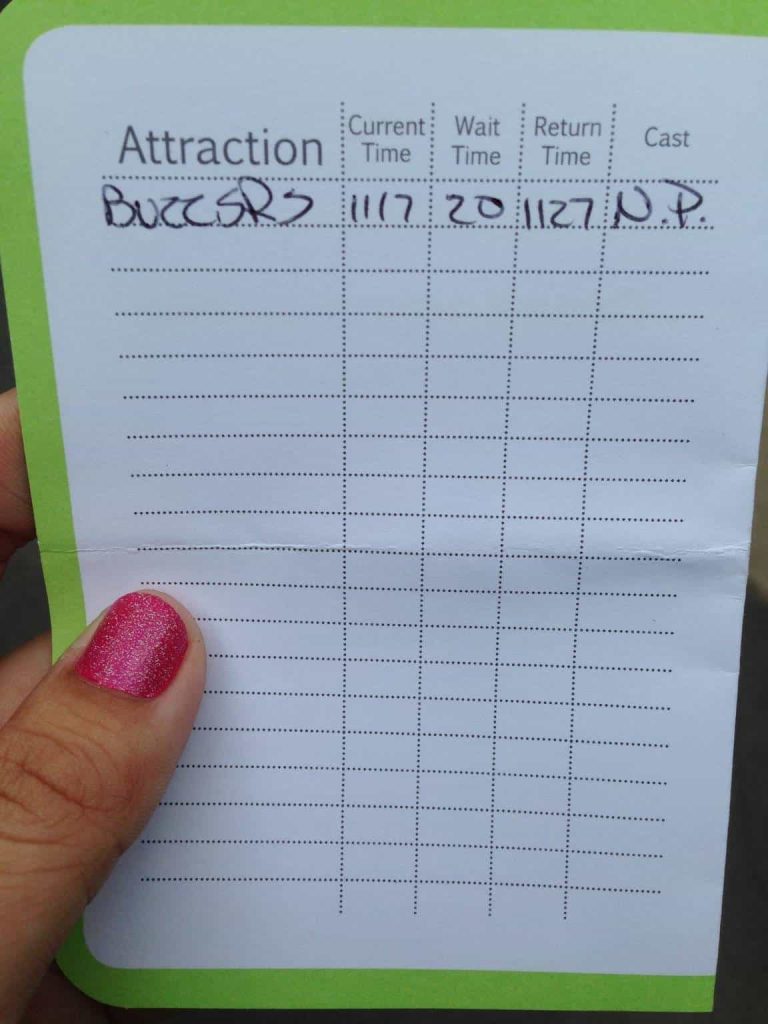 We were travelling with another guest who was in a wheelchair and were curious to see how queues that weren’t wheelchair accessible would work under this system. Tomorrowland Speedway uses an alternate entrance for wheelchairs so we went there to check it out. Previously we would have just been sent straight in through an alternate entrance. Now, guests in wheelchairs will receive a card that looks similar to a FASTPASS with a return time 10 minutes less than the posted wait. In this case the posted wait was 20 minutes, so we got a card to come back in 10 minutes. When we returned they took the card and directed us through the alternate entrance. Guests in wheelchairs do not need a separate DAS and can enter all inaccessible queues using this system (or wait in the standby line in accessible queues). 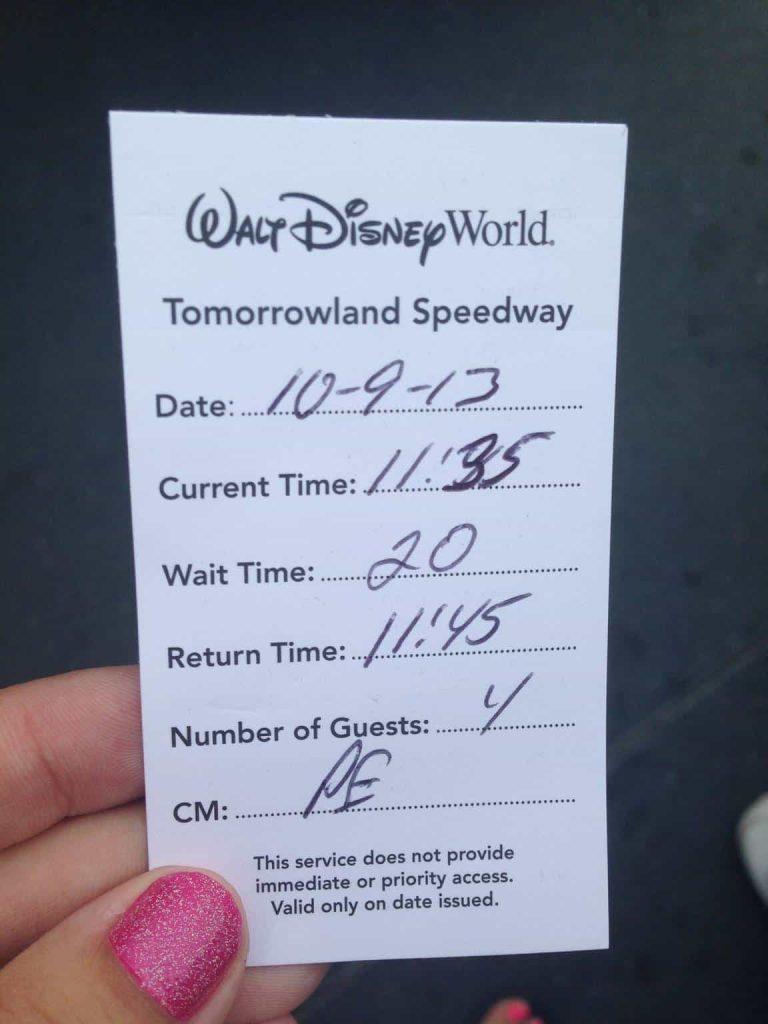 After trying out a couple more rides we felt familiar enough with how the program worked, but had a few more questions:

Is the DAS valid at Character Meet and Greets?

The GAC wasn’t valid at any meet and greets. The new card is valid at meet and greets that are more like attractions and have a formal standby and FASTPASS queue. That means you can get a return time with your DAS at Town Square Theater, Enchanted Tales with Belle, Princess Fairytale Hall, etc. The DAS is not valid at informal meet and greets such as Pluto and Marie in Town Square, Dug and Russell at Animal Kingdom, or Wreck It Ralph characters at Hollywood Studios.

What do I do if I am vision impaired since they eliminated the stamps on the cards?

On the GACs they would put stamps explaining specific needs the guest may have. One of these was a stamp for guests who needed a front row seat or alternate entrance due to vision concerns. Unfortunately, these guests will need to explain to the Cast Members at each attraction what their concerns are to ensure they get the correct entrance and seat requirement.

Can I use FASTPASS and FASTPASS+ along with my DAS?

Yes! The DAS program was designed to be used in conjunction with FASTPASS+. Cast Members are encouraging guests to use Legacy FASTPASS (while they still can) and plan FASTPASS+ reservations as much as possible and use the DAS in cases where that isn’t an option.

What if I can’t wait in line at Guest Relations?

Many guests have expressed concerns with the long lines keeping them from even being able to get a DAS. We saw several Guest Relations Cast Members with the iPads used to issue cards coming outside and assisting guests needing cards as quickly as possible. Even when lines were long we saw Cast Members coming outside and helping guests while they were sitting on a bench or in a shady area so they didn’t have to wait in line behind guests who were there for other reasons.

Overall, we had an excellent experience with the DAS. However, I am aware this may not seem ideal for all guests who need assistance. If you believe you need more assistance, explain what you concerns you have to the Cast Member at Guest Relations when they are issuing your card. We saw several examples of families calmly explaining their concerns with the program (especially those with children on the autism spectrum) and getting extra help. Some families received re-admit passes (basically a pass for immediate access to the alternate entrance) or were assisted with FASTPASS+ planning to help ensure their day go as smoothly as possible.

The Cast Members we encountered yesterday were all extremely helpful and patient. They are aware that this transition is stressful for many people and are willing to do anything possible to make sure everyone gets the assistance they need to enjoy the parks. If you have problems with the DAS or unhappy with the changes, do NOT take it out on front line Cast Members. These folks are there to help you and had nothing to do with the system changing.