WDWNT: The Magazine: So You Want To Be A Pirate? 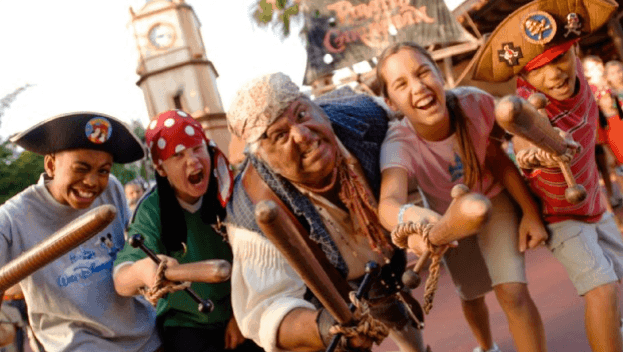 Ahoy mates! So you’re looking to join a merry band of pirates are ye???  Well, nowhere on earth is there a better place to join a brigade of swashbucklers than Walt Disney World! ARGGGH!  Pirate opportunities abound throughout the World, but the Magic Kingdom houses the secret hideouts of many throngs of scurvy pirates.  It is best to start your search in the daylight hours; after dark those dirty scoundrels are known to take to Bay Lake and Seven Seas Lagoon in search of plunder.

Any pirate indoctrination should begin on Main Street, U.S.A.  Main Street say you?  There are no pirates about on Main Street…..but a quick stop at The Emporium on the corner is in order to pick up your pirate bandana, eye patch, and earring.  Now that you look like a pirate, it’s time to seek them out and join their merry band.

Head west and cross the bridge to Adventureland.  Adventureland is home to many fabled pirates and if you’re lucky you may catch the most infamous of all, the legendary Captain Jack Sparrow.  Captain Jack and crew like to gather just inside the Adventureland gates at the Pirate Tutorial.  The show takes place throughout the day and is the perfect beginning to your adventure (check park schedule for times).  Here they will teach you how to handle a sword and other pirate duties.  You can even make an appointment to get a complete pirate makeover at the Pirates League.  The Pirates League is located between the entrance of the Pirates of the Caribbean attraction and the Plaza del Sol Bazaar.  Making a reservation for this experience is necessary. Call 407-WDW-CREW.

Your search will then lead you to the treehouse of the Swiss Family Robinson.  Shipwrecked for many, many years, there are several pirate artifacts throughout their home.  Wind your way through the paths and up the stairs to see what you can discover.  From the lookout deck, gaze around to see if you can spot any of those sneaky rascals scurrying about in Adventureland. 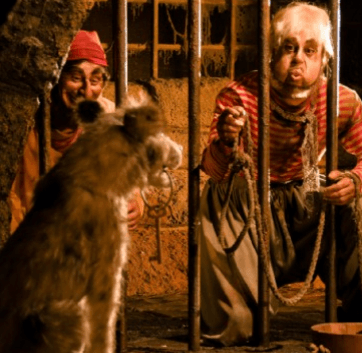 Up next, heading toward Frontierland on your left, is the home of the most infamous pirates of all.  Designed by Walt Disney himself, here you will find the Pirates of the Caribbean attraction.  Enter into an underground pirate cave, travel back in time, board a ship……there are many surprises and adventures to be had, so keep your chin up and your eyes open.  Upon exiting the ride be sure and visit The Pirates of the Caribbean gift shop to pick up a telescope, pirate jacket, or anything else made for a pirate.  This location will have what you need for what’s coming up next.

Your journey now takes you to the newest pirate creation in the Magic Kingdom, A Pirates Adventure: Treasures of the Seven Seas!  Located in Adventureland, you must find the magic talisman; it is a special card specific for this activity and here’s a hint, it can be found at the Crow’s Nest in Adventureland.  This is a brand new interactive game in which you and your family and friends finally get the opportunity to become pirates in Adventureland.  There are five different missions to complete and if you are successful you will be a member of Captain Jack’s crew!  Each of the five missions takes about 20 minutes to complete.

Time now for lunch or a quick bite at an eatery where pirates are known to congregate, Tortuga Tavern in Adventureland.  Grab a cheese burrito or taco salad, a cold drink, and find a table.  Take a load off before heading out to Frontierland.

Snake your way through the beginnings of Frontierland and keep your eyes open; you never know where those sneaky pirates could be hiding!  Make your way to Big Thunder Mountain Railroad and climb aboard the wildest ride in the west.  You won’t find any pirates here, but keep your eyes open over yonder by the water for you may see pirates hiding out in the forts on Tom Sawyer Island.  Be careful, they are known to be armed and dangerous.  Cannon fire from the forts on the island must be watched for.  And don’t forget to hang on! 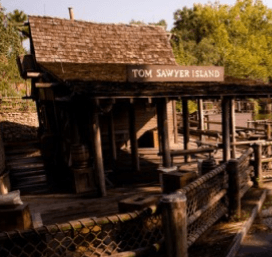 If you’re still able after that runaway train ride, make your way to the docks of Tom Sawyer Island in Frontierland.  Board one of the rafts, mateys, and don’t be afraid to try to take it over. You’re in your pirate garb after all.  It’s a short sail to the island, but prepare yourself for the island holds many surprises and hiding spots.  Follow the maps and journey to the caves, forts, and cannons, and heed this word of warning: be extra careful on the bridges.  Don’t be surprised to meet other pirate types like yourselves face to face in a fort or cave.  Being a good pirate, commandeer the raft back to Frontierland and then head around the docks toward Liberty Square.

On your left is the home port of the Liberty Belle Riverboat.  What pirate adventure would be complete without commandeering an authentic steam-powered paddle wheeler?  Take charge and head to the upper decks as the cruise begins and keep your eyes peeled for pirates, Indians, and many wild animals!

Returning the paddle boat to its owners and leaving the riverboat docks, head into Fantasyland.  Here you will meet another of the most infamous pirates to have ever sailed, the legend himself, Captain Hook.  Join the Captain, Mr. Smee, and, of course, Peter Pan and Wendy on Peter Pan’s Flight.  You’ll be suspended above the most famous pirate adventure ever.  Look out for the Croc!  Remember, you’re one of the pirates now!

Staying within the hallowed walls of Fantasyland it’s time to head under the sea to seek some treasure.  Where in the Kingdom could one find more treasure than with one of Disney’s famous Princesses?  Yes, I mean that famous mermaid, Princess Ariel.  Jump on her newest adventure, Under the Sea: Journey of the Little Mermaid.  Keep your eyes peeled and grab what booty you can.  Remember that evil Ursula may be watching, too!  Don’t get caught and be sure to wave to Flounder and his friends as they are pirate fans.

Now your quest will have you leaving the Magic Kingdom behind and following the brick path that leads to the docks of Disney’s Contemporary Resort (about a ten minute walk).  Here you will join the Pirates and Pals Fireworks Voyage (reservations required, call 407-WDW-PLAY).  This is the perfect way to end a day of pirate adventuring.  Captain Hook and Mr. Smee will be there to see you off and Captain Patch will be your captain and guide for this epic journey.  You’ll sing pirate songs, have pirate snacks, play games, and win prizes, all while sailing around the Seven Seas Lagoon.  Wishes fireworks from the Magic Kingdom is even more magical from the deck of your pirate ship!  Watch it and the Electrical Water Pageant while sailing on Bay Lake and the Seven Seas Lagoon!  More surprises will await you upon returning to the home port at Disney’s Contemporary Resort.

Tuckered out by now, you are an official Disney Pirate.  Time to head home, count your plunder and booty, and relive all the magical adventures of the day!  The best part: you can do it all again on your next Disney visit.  Pirates of all ages are always welcome in Walt Disney World!