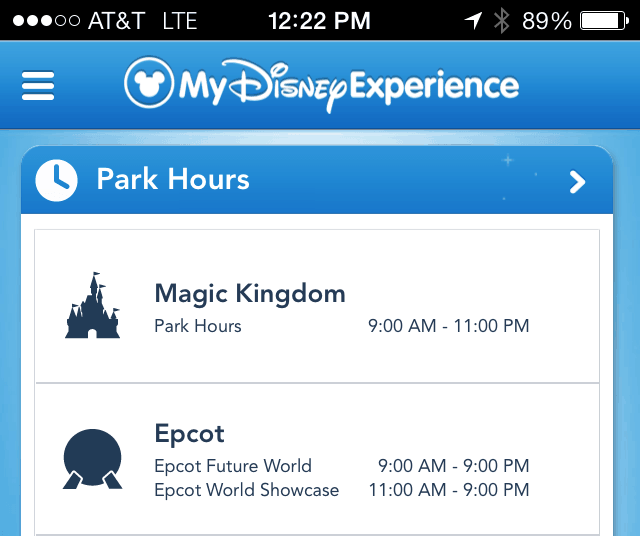 Lets take a step back for a second though, back in 2009 Disney partnered with Verizon Wireless to bring us the “Mobile Magic” app which allowed us to see Wait Times, FASTPASS return times, and information on where to meet and greet with characters. This was an exclusive service for Verizon customers only leaving out everyone else. In early 2012 Disney released Mobile Magic for iOS users on AT&T and Verizon. Even though the app was still branded for Verizon, you could use it with AT&T as well. In mid 2012, Disney launched “My Disney Experience” which wasn’t branded to any carrier and could be used on any iOS/Android device. Today, Disney announced a new partnership with AT&T.

Disney Parks has just signed an exclusive contract with AT&T to make them the official mobile provider for U.S. Disney Parks. With this new agreement, AT&T will have the opportunity to sponsor Disney-created soccer and runDisney events at the ESPN Wide World of Sports Complex at The Walt Disney World Resort. In addition to this, Disney will join AT&T to educate Cast Members and guests about the “It Can Wait” campaign to educate consumers about the dangers of texting while driving.

AT&T and Disney will also collaborate to enhance the experience for the growing number of Disney guests using smartphones and tablets during their visit.  Furthermore, Cast Members will use new mobile devices on AT&T’s network to help deliver Disney’s legendary guest service. President of Walt Disney Parks and Resorts Operations, United States and France had this to say about the new partnership “This alliance joins two companies that share a commitment to providing quality experiences, and we look forward to the collaboration as we continue to leverage technology to enhance the experience for our guests.”

Included in this new partnership is the ability to enhance a variety of AT&T technologies in use at both Walt Disney World and Disneyland. More than 25 new antenna systems will be installed to increase the wireless capacity in areas with high mobile traffic (i.e. The Magic Kingdom and Epcot), more than 350 small cells will be installed to extend network connectivity throughout, and more than 40 repeaters to further enhance the mobile experience for both guests and Cast Members.

As someone who has AT&T and visits Walt Disney World often, I can speak with experience that LTE service is really terrible at most of the theme parks and at times completely absent. If all the above is true, then I’m beyond excited to have excellent service while at the parks to continue to offer new updates, photos, and videos in the moment. With Disney now focusing so much on the MyMagic+ experience which relies so much of your smart phone, AT&T users will be able to experience it better with the new antennas.