Gone, But Not Forgotten: SpectroMagic 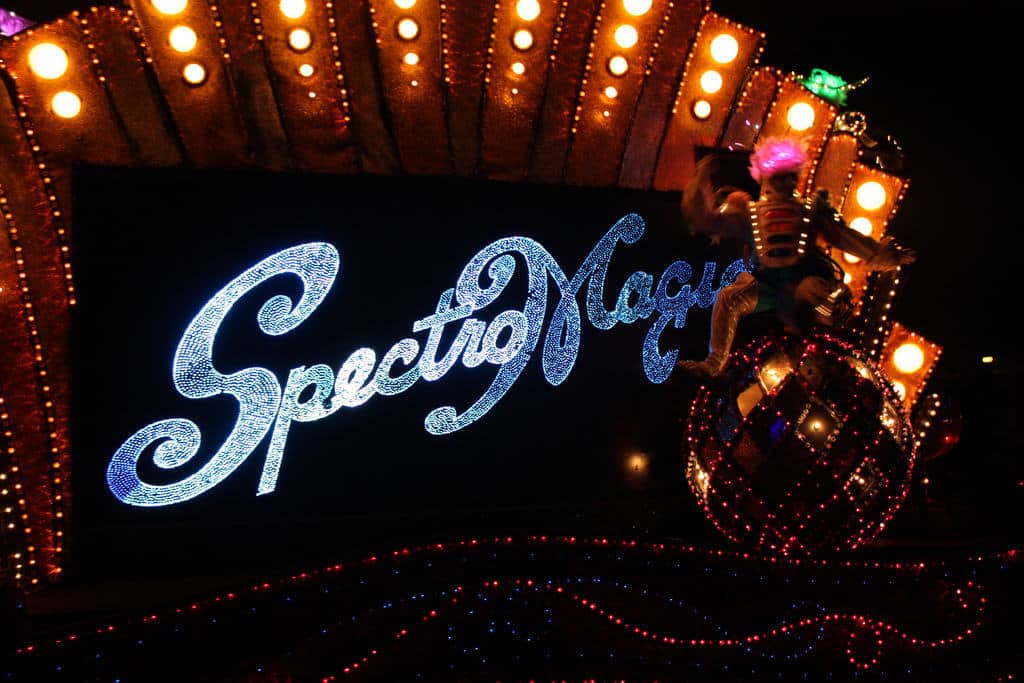 I was going to write about something else for the first of what will be a recurring column here on WDWNT The Magazine, our Gone but not Forgotten series, but when the official word finally came last week that the beloved SpectroMagic parade would indeed be “retired” permanently (read: destroyed), I knew I would need to write about it first. 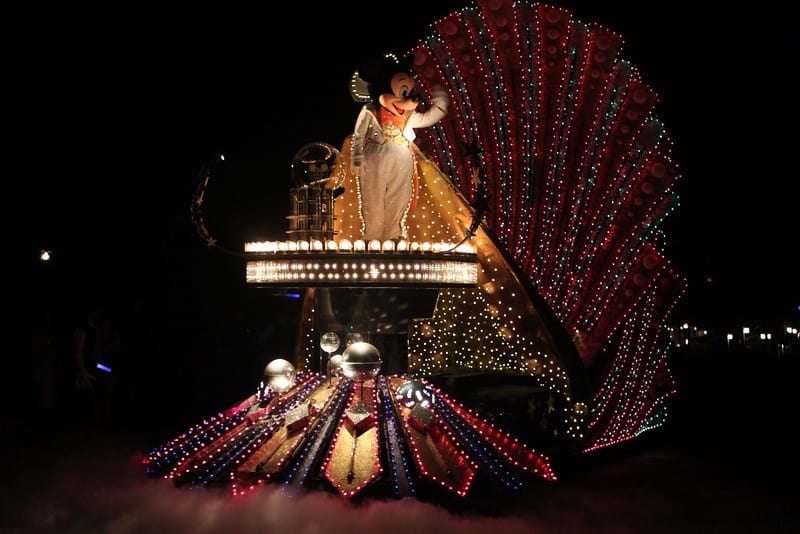 SpectroMagic was introduced as part of the Walt Disney World Resort’s 20th anniversary celebrations in 1991. It replaced the Main Street Electrical Parade, which was being sent to Disneyland Paris. This 20 minute nighttime parade featured scenes from movies such as The Little Mermaid (still a new Disney movie at the time this parade debuted), Fantasia, Sleeping Beauty, as well as a vast collection of other characters. It was also known for the “SpectroMen,” clown-like characters who rode what appeared to be giant disco balls.

Why was it great?

My absolute favorite part of this parade was the music. Easily one of the best scores ever to be played in a Disney park. The main theme was written by John Debney. It was notable for being written in waltz time, unusual for parade music.

I don’t think there is a single piece of Disney parks audio that will more quickly transport me there than the fanfare from this parade. Hearing even a few notes of it puts me right there on Main Street. I could (and do) listen to the entire score when out on a run, or in the subway heading to work. It defines Disney audio for me. In fact, every episode of the WDWNT Podcast ends with David Benoit’s jazz piano rendition. If, somehow, you have never heard the SpectroMagic score, go do it right now. The rest of the article will be here when you get back.

The parade made very good use of fiber optics, which gave it a sense of movement and subtle beauty that was a technological advancement in its early years. One of the most memorable moments was at the end, when the floats would alternate between white and color lights in sync with the music. Another very memorable float was the Chernabog float in the Fantasia section. This mechanical float could fold and unfold its wings to alternate between the mountain top and the demonic character as seen in the film.

More than the fireworks or anything else, this parade defines nighttime in the Magic Kingdom for me. Often I will skip the shows and entertainment that I have seen dozens of times, but I would almost always stop and watch Spectro as it passed. It was an experience that was unique to Walt Disney World as none of the other Disney parks had this parade.

Why is it gone?

To be completely honest, I am not sure I really understand what happened here. The parade was put on hiatus for the Summer Nightastic celebration in 2010. Since the same had been done a decade earlier, I, along with most other Disney fans, assumed that it would be back before the end of the year, or at least within a year or so. And that was the promise. Main Street Electrical Parade was supposed to be temporary. But as time went on, it became more and more permanent.

Rumors began to spread (don’t they always) that the parade was never returning, and that most of the floats had, in fact, been destroyed. Disney kept quiet until July 2013 when they finally confirmed that SpectroMagic indeed was “retired” and would not be returning to the park.

By all accounts, the parade was very popular. It is probably just the people I hang out with, but it seemed to be more popular than the Main Street Electrical Parade, although you could argue that point for the rest of the life of the universe, of course. And it isn’t like it was retired for something new. The parade that replaced it is from the 1970s. The most common story I have seen is that the floats were poorly stored and were damaged by the weather. Okay, but they managed to store these floats for almost two years a decade ago. Disney has been in Florida for over 40 years; you think they would have learned how to handle storage in that climate by now.

I always hate these kinds of “yeah, that’s not coming back” closures because they don’t give you that last chance to say goodbye. I had no idea that when I watched the parade in May 2010 that it would be for the last time. It’s not like I can’t watch the parade in any one of a million different videos online (or in my own personal collection for that matter), but it would have been nice to have been given a chance to see it in person knowing it would not be back.

This is a removal that I really am not thrilled with. I think that SpectroMagic was superior to Main Street Electrical Parade (even though I do enjoy that parade very much). Maybe it is a little nostalgia, although Electrical was actually the first parade at the Magic Kingdom I ever saw, years before Spectro even existed. I think I would feel better about this if we had at least gotten something new, something amazing. A parade that uses the 20+ years of technology we have had since SpectroMagic’s premiere. Maybe that is still in the cards. But for now, I guess I will have to make due with listening to my SpectroMagic ringtone as I walk down Main Street at night. So I can think of no better way to end this article than quoting the parade itself:

Though we say goodbye

We cast a spell that won’t be broken

Live in our dreams!

Please enjoy our video of the final performance of SpectroMagic: