Today, Wednesday, July 17, is Disneyland’s 58th anniversary. In celebration of this milestone, D23: The Official Disney Fan Club, has launched the “Off the Map Sweepstakes”.

Twenty-five D23 Members and their guests will win a tour of four of Disneyland’s rarely-seen, but widely known locations.

“Our friends at Disneyland will give the winning D23 Members a special glimpse at some of the park’s most amazing hidden gems, special places that most guests never get to see,” said Steven Clark, Head of D23. “Our first ‘Off the Map’ member event in 2012 was such a he hit that we wanted to reprise it with this special sweepstakes so even more of our members have a chance to visit these truly magical and historical Disneyland locations.” 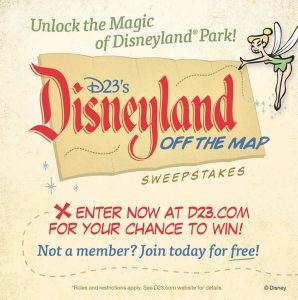 Winners of this once-in-a-lifetime opportunity will be able to explore:

The sweepstakes is open to D23 Members beginning July 17 through August 23 at D23.com. The tour will take place on Wednesday, October 2. Winners will be able to attend with one guest. For complete rules, details, and eligibility please visit D23.com. No purchase required. Anyone may join D23 for free at the D23 website.

Be sure to go and register for the sweepstakes and Good Luck!