When I say Pixar, what is the first thing that comes to your mind? Maybe the hopping lamp or the rubber ball with the star on it? Better yet, who comes to mind? How about Steve Jobs, the man who funded PIXAR when it became an independent company? Or John Lasseter, Pixar’s visionary genius who helped to bring the company to Hollywood fruition? Sure there are others: Pete Doctor, Ed Catmull, the list goes on and on but there is another Pixar great that you might not have heard of. I’m talking about Joe Ranft. You know, Joe Ranft? He was an animator, storyteller, and occasional voice actor. Heimlich the Caterpillar, Wheezy the Penguin, and Jacques the Shrimp (viola, he is clean!) all have one thing in common: Joe Ranft. Still don’t know him? From Toy Story to Cars, Joe worked on them all and he did so with artistic savvy and quiet diligence. Alright, alright…so who was this guy and what else did he do? 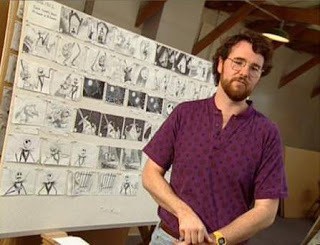 Back in the good ‘ol days when animated features were still being made by hand one drawing at a time, a young boy born in Pasadena began to take an early interest in the arts. He fancied himself a storyteller, he liked to draw and make people laugh. He enjoyed film and the occasional magic trick. That young boy was Joe Ranft. With such a personality, it comes as no surprise that Joe, now a young man, enrolled at California Institute of the Arts where he studied animation and began to hone his skills as a writer and as an animator. After two years of study, Joe was offered a job and began working for Walt Disney Studios as a writer and storyboard artist in 1980. During these early days of Joe’s work, he received occasional training from the legendary Eric Lawson, who was one of Walt Disney’s original animators known as the “Nine Old Men”.

During his time with Disney, Joe worked on several animated features as a writer and animator; major blockbusters such as Beauty and the Beast, Aladdin, and the Lion King just to name a few. It was also during this time that Joe met John Lasseter. In the early 90s, Joe left Disney and joined Lasseter at Pixar where he took his first job as story supervisor for Toy Story, a role for which he received his only Academy Award nomination (Best Writing). Joe would continue to work at Pixar. He wrote and provided the occasional voice for many Pixar classics such as A Bug’s Life, Monster’s Inc.,  The Incredibles, and even some small voice credits in Cars (I’m not a Mack, I’m a Peterbuilt!)

Sadly, Joe’s life came to a tragic end when a car he was riding in crashed. He was on his way to a conference where successful businessmen help to mentor young men who are trying to straighten out their lives. Few have made such an impact.

In 2006, Joe was recognized as a Disney Legend, an accolade that is so well deserved. I hope you’ll join me in remembering this amazing storyteller, animator, and human being. Thanks Joe for everything you’ve given to make our day just a little bit brighter.

“It’s fun to draw for me and explore what’s there. To create a drawing and see it come alive, you’ve caught something, something unique.” – Joe Ranft

“For every laugh, there should be a tear.” – Walt Disney