Hello Humans! Today I’ll be sharing the history of Downtown Disney and venturing into what lies in its future…

Downtown Disney is an outdoor shopping, dining, and entertainment complex on the south side of Disney’s property. It was initially called The Lake Buena Vista Shopping Village, opening on March 22, 1975, as a shopping complex intended to serve the planned residences within the Walt Disney World property. As the target audience ultimately became all Walt Disney World visitors, it was renamed Walt Disney World Village in 1977. In 1984 came the Eisner era. His famous “keep them on property” philosophy was applied through beefing up the area. The area started to attract locals as well.

In 1986, to compete with the growing popularity of the Church Street Station clubs in downtown Orlando, Pleasure Island was announced. It was opened on May 1, 1989, the same day as the Disney-MGM Studios theme park. It was the height of Eisner’s philosophy: if someone else in the area is doing it, we’ll do it too, except better. Later that year, the original adjacent shopping complex was renamed The Disney Village Marketplace.

In 1995, major enhancements and expansions were announced for the area, with The Disney Village Marketplace and Pleasure Island being combined into a newly-branded district named Downtown Disney. Two years later, when the rebranding was implemented, major additions also came to the area. 1997 saw the addition of Downtown Disney West Side, featuring La Nouba by Cirque Du Soleil, DisneyQuest, and Virgin Megastore. The expansion of the World of Disney and the AMC Pleasure Island Theaters also came at this time. With the new West Side, a thriving Pleasure Island and a packed Marketplace, 1997 until 2004 was arguably the Golden Age of Downtown Disney.

Pleasure Island was a nighttime entertainment complex with two comedy clubs and four dance clubs. While the Village/Marketplace and West Side have always been free to enter, Pleasure Island required the purchase of admission and was closed during the day. The clubs included 8TRAX, BET Soundstage, Comedy Warehouse, Mannequins Dance Palace, Motion, Pleasure Island Jazz Company, Rock ‘n’ Roll Beach Club, and, of course, the Adventurers Club. Beginning in summer 2004, Pleasure Island became free to enter, and only those guests entering the nightclubs were charged admission. It was from then that Pleasure Island began its decline. The free entertainment was attracting large groups of local teens which was considered “undesirable.” As a teen myself who wants to go to concerts without paying the price, I can easily see why this happened.

Many repeat Walt Disney World visitors were and still are upset by the closing of Pleasure Island, which provided an escape for adults from the theme park grind and an overall fun experience. Not to mention the fact that the performers, especially at the Adventurers Club and Comedy Warehouse, were of the highest Disney quality. Although I never got to experience these clubs, being 16, people have recounted some of their most fond Walt Disney World memories to me, which were from Pleasure Island. Downtown Disney nightlife is definitely not to be underestimated on the Walt Disney World hierarchy of attractions.

All clubs closed permanently in 2008 with the nightly “New Year’s Eve” celebrated for a final time. New shops and restaurants were planned to replace the closed clubs, but the economic recession of 2009 delayed those plans. On November 18, 2010, Walt Disney World Resort announced a project named Hyperion Wharf, which was planned to replace the Pleasure Island complex. Pleasure Island would have undergone extensive renovations and re-theming to transform into the early twentieth century wharf-themed entertainment area. New shopping and dining locations would have also been added. In July 2011, it was announced that these plans had been delayed. Hyperion Wharf was later cancelled in favor of Disney Springs: a retheming of the entire Downtown Disney area. 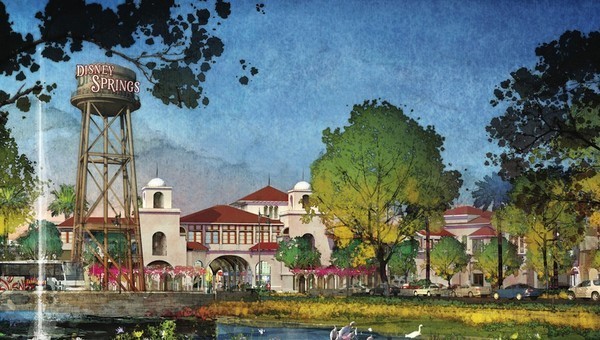 Disney Springs, expected to be completed in 2016, will be divided into 4 main “neighborhoods”: The Town Center, The Landing, The Marketplace, and The West Side. Along with the retheming, many additions are planned for logistical purposes. The specific additions listed are based on the leaked concept art and not official Disney press releases. These additions include a bridge across the marketplace lake, a bridge from the marketplace to Saratoga Springs, and a multi-level parking structure. Right now, Downtown Disney is a logistical nightmare, so these modifications are certainly welcome. Specifically, the inability to easily walk from one side of the complex to the other is crippling to the success of the West Side and Pleasure Island. In terms of theme, Disney Springs is to “Draw inspiration from Florida’s waterfront towns and natural beauty,” according to the official Disney press release. The West Side, as per the leaked images, will have abandoned, elevated train tracks where adults can drink above the shoppers below. The whole complex is supposedly a town that evolved around a single spring during the days of the Florida pioneers. Thus, the Downtown Disney area will for the first time have a coherent backstory, something that should always sit well with Walt Disney World veterans.

Completion of the Disney Springs project can’t come soon enough for fans of the area who remember the days when Pleasure Island was a nightlife hotspot. The last five years of Downtown Disney have been devoid of an overarching theme to transform the commercial district into a truly Disney destination. Nonetheless, with the plethora of marketplace shops, DisneyQuest, and the AMC Theaters, the Downtown Disney area has long been a staple for the “off day” or rainy day for guests. With ever-improving food and entertainment choices, Downtown Disney is also a draw for locals. The Disney Springs theme will only improve the area, infusing life into the barren wasteland of Pleasure Island and making the complex more than just something to do on an “off day.” We’ve already seen additions such as Splitsville and the Fork & Screen theater that have started to draw people away from the Marketplace. With better parking, easier navigation, and more options coming with the Disney Springs project, Downtown Disney very well may enter a new golden age in the near future.