Arrow Dynamics is a name that is well know to coaster lovers, but many Disney fans may be unaware of the fact that Arrow was instrumental in the creation of Disneyland. Throughout its history, Arrow redefined theme park attractions and helped jump-start the modern coaster boom that continues to this day.

Arrow caught the attention of Walt Disney in the early 1950s as his plans for Disneyland were moving from an idea on a park bench to the real world. This was to he an innovative park, and would not simply be a collection of off the shelf carnival rides. This was particularly evident in the dark rides of Fantasyland. Just a short list of Arrow built Disneyland attractions include Mr. Toad’s Wild Ride, Pirates of the Caribbean, The Haunted Mansion, Snow White’s Adventure, The Mad Tea Party, and Dumbo. Arrow was instrumental in creating the ride systems that powered these attractions.

This was not a minor partnership. Walt himself visited Arrow, and the two companies worked closely to ensure that Disneyland was ready to open as scheduled. On opening day, nearly all of Fantasyland consisted of Arrow attractions. It proved that Arrow could go beyond simple carousels (although Disneyland did include one of theirs as well). What came next though, is what really put the company on the map. 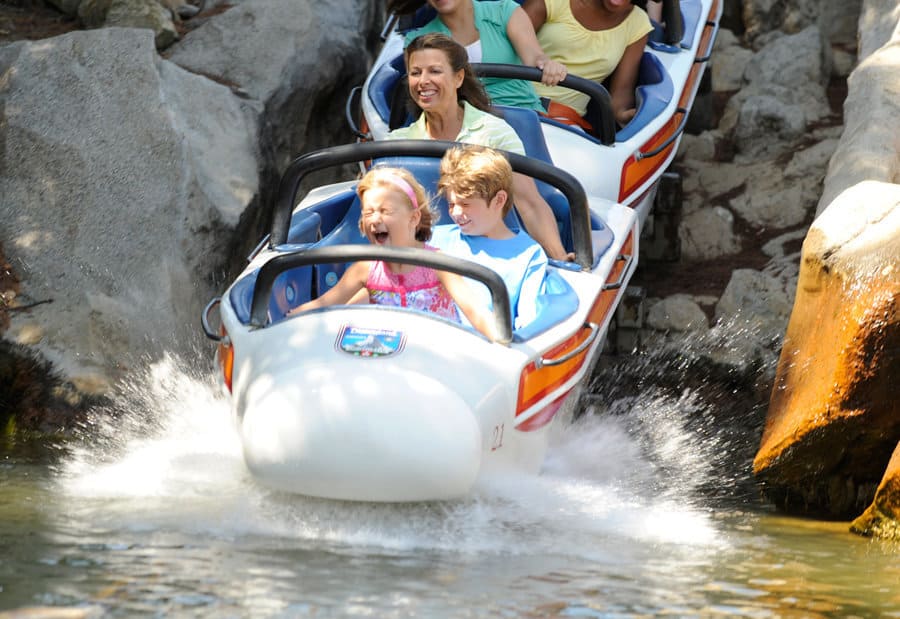 If you went back in time to 1955, Disneyland and Arrow Development would have seemed the least likely to change the roller coaster industry forever. Up to this point, Arrow had been known exclusively for its flat rides. Disneyland had famously eschewed thrill rides all together. Roller coasters were largely still wooden. Steel coasters were little more than copies of their wooden counterparts that used the same trains and same track designs. The famous Coney Island Cyclone, for example, is categorized as a wooden coaster, even though a large part of the structure is steel (though the track is traditional wood).

When Walt finally decided that Disneyland was ready for a coaster, it had to be something new and fresh, like Disneyland itself. So Disney and Arrow set out to make something that would have a permanent effect on the thrill industry, one that has enabled nearly all of the record-breaking coasters of today. It is an idea that now seems so simple; tubular steel tracks.

The Matterhorn Bobsled coaster would not be an off the shelf ride. It was to be themed. It would not look like a traditional coaster, but would need to fit the Disneyland aesthetic. So Arrow, a company that had not previously built a roller coaster, went to work on this new concept.

The tubular track gave them the ability to do some very important things that made the Matterhorn unique. It allowed for a much more compact coaster, one that could fit in the middle of Disneyland without looking out-of-place. The coaster’s compact size allowed for the sort of theming that was required to fit in to the park. It also enabled a quick succession of unexpected turns and drops. These features allow a ride to be thrilling without needing to be extremely tall or fast, and is an element that Disney has relied on for its coasters ever since. And although it is not nearly as smooth today as it was 50 years ago, the new track allowed for a less rickety ride, and has allowed it to run nearly daily for over half a century.

The Matterhorn was also unique at the time in allowing multiple vehicles on the track at the same time, thanks to the innovative use of multiple braking zones along the track. Rather than having to wait for an entire ride cycle to complete, vehicles could be regularly dispatched, allowing for a much higher hourly capacity. Just try to imagine the line for the Matterhorn today if this were not the case.

The Matterhorn launched Arrow into one of the premier roller coaster manufacturers in the world. It also proved to Disney that it was possible to build a thrill ride that could still be enjoyed by families, and could be well themed and fit nicely into this new type of park. Many coasters from this era have been demolished, but the Matterhorn not only still stands, but is still ranks among the most popular attractions in the park.

The Matterhorn set off decades of innovation from Arrow Development, in part due to a sizable investment from Disney. Most notably, Arrow created the first Log Flume ride in 1963 with El Aserradero at Six Flags Over Texas. Nearly every amusement park in the world would add a log flume to its roster, Disney included.

But most importantly for the modern roller coaster, Arrow was the first company to successfully include inversions. While coasters had previously attempted to turn riders upside down, they were unsafe, painful, and short-lived. The tubular steel track that Arrow had developed allowed for a smooth, safe loop to be added to the track. Arrow’s prototype, Corkscrew premiered at Knott’s Berry Farm in 1975. A coaster by the same name at Cedar Point opened the next year, being the first to have three loops, one of them a vertical loop (although Arrow lost out to the Schwarzkopf designed Revolution as the first coaster with a vertical loop by seven days).

Another important innovation, if less successful, came in 1981. Arrow designed the first modern suspended coaster, The Bat at King’s Island. This was a truly unique ride that placed the track above the riders’ heads, in cars that could freely swing from side to side (not to be confused with the later inverted coasters, which have no floor but cannot swing independently). While extremely popular with the few who were able to ride it, The Bat proved to be problematic for the park. It spent more time closed than open, and required near constant maintenance work to keep it running. It was closed and dismantled three years later. Arrow would eventually get it right, and suspended coasters were popular before being displaced by the more modern inverted coasters. Today, few first generation suspended coasters remain.

In the early 1980s Arrow was purchased by the German ride manufacturer Huss after a decade of ownership by the Rio Grande Railroad company. The Arrow Huss company lasted only five years before Huss filed for bankruptcy. In 1986, Arrow Dynamics (the name the company would be best known by) emerged.

One of the most famous and most popular Arrow Dynamics coasters came in 1989, Cedar Point’s Magnum XL–200. This was the first roller coaster to reach a height of 200 feet, and began a new golden age of taller, faster roller coasters. Notably, the coaster had no inversions, after years of Arrow and others chasing more and more of them. Instead, the ride focused on its height, its speed, and a considerably amount of airtime. Magnum regularly tops the best coasters list to this day. 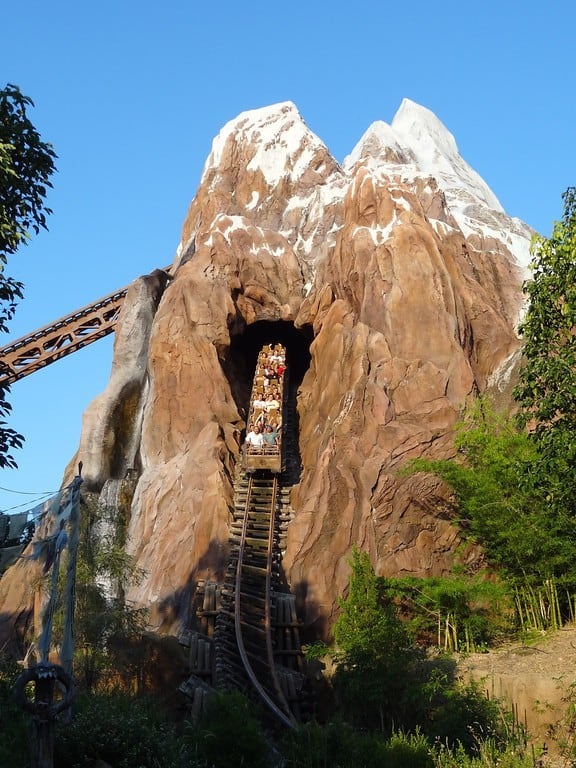 Thorough this period, Arrow continued its work for Disney. It followed up the very successful Matterhorn with another steel coaster, this time in Florida. Space Mountain took the Matterhorn design and added the extra thrill of darkness, giving the relatively tame coaster (its maximum speed is about 27 mph) a heightened sense of speed and lack of control.

Arrow had already created many mine train style coasters when Disneyland contracted them to build Big Thunder Mountain Railroad. Arrow would also work on Walt Disney World’s Big Thunder Mountain, but this would be the final time Disney would use Arrow for its coasters. When Tokyo Disneyland looked to create its own Big Thunder, they instead turned to rival Vekoma. This began a new partnership which would also include Rock ’n’ Roller Coaster, Expedition Everest, as well as the Paris Big Thunder.

In the early 1990s, a new company entered the coaster wars, Bolliger & Mabillard (B&M). This new company would perfect the Stand Up Coaster, and invented the Inverted Coaster, which places the track above the rider and nothing beneath their feet. The inverted coaster became the absolute standard for the industry, and nearly every major amusement park added one in the 1990s.

Busch Gardens contracted B&M to build two new coasters for them, one in their Tampa park, and one in Williamsburg Virginia. The ride that opened in Tampa, Kumba was an immediate hit. It is one I personally remember riding and being absolutely blown away by. It was tall, fast, and had multiple inversions, yet was a completely smooth ride. Its layout still inspires B&M coasters to this day.

But B&M was not able to keep up with its current workload, and so the Williamsburg coaster passed to Arrow, which had built that park’s popular Loch Ness Monster coaster. Feeling pressure to match B&M’s achievements, Arrow stepped out of their comfort zone with Drachen Fire. For as much as Kumba had a reputation for being smooth and comfortable, Drachen Fire would be the complete opposite. The ride quickly gained a reputation for being rough and even painful. It closed in 1998, and was dismantled in 2002. As B&M rose, Arrow began to decline.

An interesting note about Drachen Fire. It was one of only three coasters to have an inversion known as a cutback. One of the others is Space Mountain: Mission 2 at Disneyland Paris, a Vekoma coaster.

Arrow’s last innovation was a truly unique coaster, X at Six Flags Magic Mountain. This “4th dimensional” coaster places the riders on the side of the track, with vehicles that could move independently from the train itself. The ride was, and remains incredibly popular, but was plagued with problems.

Arrow Dynamics filed for bankruptcy in 2001, and was purchased by S&S Power, a company mostly known for its drop towers and other pneumatic rides. S&S Arrow has continued to make a few 4th dimension coasters, but nowhere near the level of constructions from their time as an independent company.

Despite all this, Arrow Dynamics coasters have remained a staple of parks around the world. It is nearly impossible to take a trip to Disneyland and not ride an Arrow attraction, even if you do skip the Matterhorn. Arrow Dynamics helped build the modern theme park.