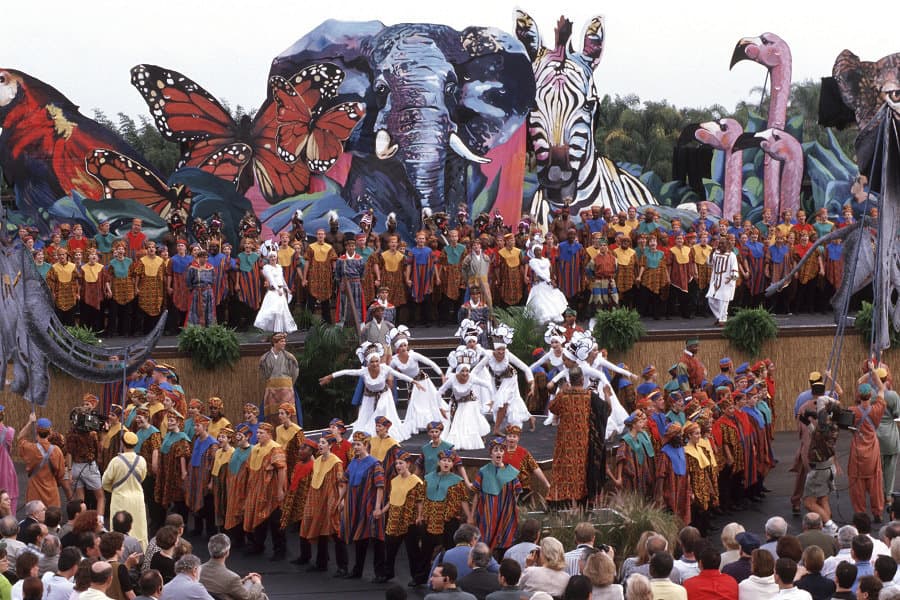 [dropcap]F[/dropcap]or the Disney Parks fans, there can be no greater event than the opening of a new theme park.  The last time this rare event occurred at Walt Disney World was April 22, 1998. I was there–a senior in high school skipping class to attend. Earth Day was an apt choice to birth a new park based on conservation and the natural world. Disney’s Animal Kingdom officially debuted that Wednesday at 7 AM.

Animal Kingdom had already been in soft openings for weeks for Cast Members and annual pass holders, but the official opening still felt like something special. Arriving to the plaza in front of the turnstiles a little before 6AM, I was already so far behind in the sea of people I could not see any of the actual opening ceremony events, but the dedication still speaks to what the park is and the broken promises of what it was supposed to be–Beastly Kingdom was well known, even then.  As Michael Eisner read that morning, “Welcome to a kingdom of animals… real, ancient and imagined: a kingdom ruled by lions, dinosaurs and dragons; a kingdom of balance, harmony and survival; a kingdom we enter to share in the wonder, gaze at the beauty, thrill at the drama, and learn.”

Once past the turnstiles, the crowd didn’t seem to just speed toward the Safari Village (now Discovery Island). The winding paths of the Oasis captivated the crowd. People were steadily moving forward, but groups would veer off to stop and look at the exhibits. While we stopped for a brief look at a few habitats, we moved towards our first intended stop fairly quickly– Dinoland USA. We didn’t really look around much, but we headed straight to Countdown to Extinction (now Dinosaur).

I had been on Indiana Jones and the Temple of the Forbidden Eye a few years previously, so I thought I knew what to expect. The ride, still one of my favorites, was at it’s best back then. The jumping compsognathus, the diving pteradon, and the final asteroid were all there and working. These effects added something to the ride that is missing now but will hopefully return someday. Exiting the ride, we didn’t stop to look around the heavily branded McDonald’s Dinoland, the name and logo were also all over the park map; we decided to hit the E-tickets and return later.

This proved to be a good idea; when we arrived at It’s Tough to Be a Bug, the queue was probably 40 minutes long, if not longer. We actually enjoyed the time in queue, and as we looked at all the intricacies carved into the Tree of Life for the first time, it did seem to make the wait go quicker. I’m sure everyone has had his or her own first time experience in the show and has watched other guests react to the tactile effects for the first time, but being part of an entire crowd freaking out as the sting effect hit might be my most vivid memory of that day except for the screams from the under butt bugs at the end of the show.  At the time, I think the effects made it my favorite 3D show at Walt Disney World, but it’s repeatability has definitely waned.

After exiting the Tree, we walked into Asia; only Flights of Wonder and a dock for the now non-existent Discovery Riverboats were there; however, the “Adventurer’s Guide” park map showed the construction of what was then referred to as Tiger Rapids Run. Next, we took the boat back to Safari Village, and we headed to Harambe Village and Kilimanjaro Safari.

Of the attractions I visited that day, the Safari has probably changed the most.  The wait was only about a half hour, and I remember the TVs setting up a good preshow of the Harambe reserve; I don’t know if they still do this, I haven’t ridden it without a FASTPASS since then. The animals were actually out and fairly active that day; I’ve seen it much better and much worse over the years. The most memorable difference was the existence of the Big Red plot and her body.  This is the only time I remember seeing the body. I’ve heard people say it was only there for the previews, but I clearly remember seeing it there that day.

We moved on to the Gorilla Falls Exploration Trail (now the Pangani Forrest Exploration Trail – I think there’s a pattern here). Here, very few of the animal exhibits were active. The animals were in their habitats, but they seemed to still be shying away from the viewing locations. I knew about the tricks Disney had employed to keep the animals visible, but they didn’t seem to be working too well. The lack of animals led a friend to paraphrase Jurassic park: “You do intend to have Gorillas on your Gorilla Falls Exploration Trail?” I like to think this lead to the name changing just a few months later. Not all the animals were hidden from view, and I do remember being fascinated by the meerkats and the aviary.

With some time to kill before lunch, we headed to Conservation Station aboard the Wildlife Express; there was no mention of Rafiki anywhere.  It was still a good distraction, but I don’t remember anything standing out about it at all as two high school  seniors weren’t exactly the target audience for the petting zoo. After getting back to main part of the park, we decided it was time for lunch. All of the quick service locations had fairly massive backups; the park map listed only five “Dining Locations” as separate from “Quick Bites.” We ended up getting the perennial favorite turkey leg at the Dino Diner cart (now Trilo-Bite) and sneaking into the back of “Journey into the Jungle Book.” The show was good and should have stayed longer than it did.

We decided to ride Countdown to Extinction again and encountered something that you won’t see anymore since the addition of FASTPASS: a line circling the entire carnotaurus rotunda. We spoke to some other people who told us what we missed on the other half of the Discovery Riverboats. So, we decided to head over to the Safari Village dock, but the line was an hour long. We went back and started to walk around the Dinosaur Jubilee which was a tented area containing some very cool exhibits including the skull of an actual Tyranasaurus rex nicknamed Sue. Sue was a truly unique exhibit to a Disney park and now resides in the Field Museum in Chicago. The exhibit was something that Animal Kingdom does well in certain places but is lacking in Dinoland–a real life look at the animals as they exist, and in this case as real fossils being examined.

At this point, word had spread among the guests that Disney was giving commemorative lithographs as guests were leaving the park. We were not quite done for the day but headed out to the Oasis to pick up our prints before they ran out. Afterwards, we wandered around and took in the animal exhibits in the Oasis and around the Tree of Life and shopped for a few hours. By 3 PM, we were ready to head home and face the three-hour drive ahead of us. We did catch part of the March of the Animals (later Artimals) before leaving too. We spent 8 hours in the park and didn’t even see half of the shows; Festival of the Lion King and Pocahontas and her Forrest Friends were both showing that day. Long before Kali River Rapids and Exhibition Everest, Animal Kingdom was still a full day park if you took the time to examine it.

I don’t really remember any other official events commemorating the opening day. There was a corridor of media booths with radio and television stations from across the country that lined one of the paths out of Africa, and we stopped to talk to a couple of Miami DJs we were familiar with. I don’t think large-scale ceremonial events are really necessary to appreciate the weight that day carried. The crowd had a unique energy to it and an awareness of the occasion. If you ever get a chance to visit a park opening, it truly is an event worth the trip.

Ron has been going to WDW longer than he can remember. As a former Cast Member, he has always tried to share his love of Walt Disney World. Ron can be reached at graceysbutler@gmail.com.