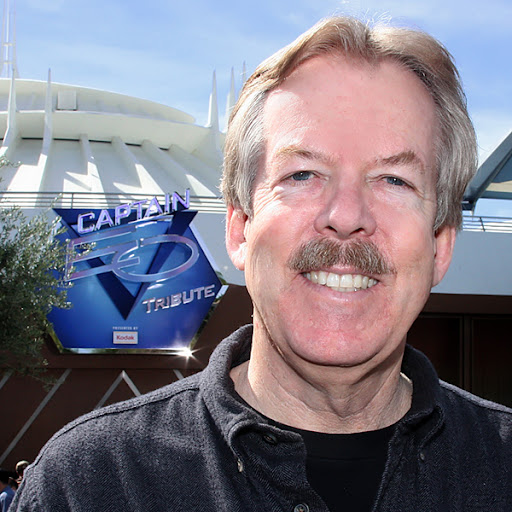 [dropcap style=”font-size: 60px; color: #9b9b9b;”] T [/dropcap]ony Baxter. It’s not necessarily a household name and for most, it’s not even a familiar one. True enough, if I asked you to name an influential person in the history of Disney Theme Parks, Tony Baxter might not even come to mind. But for some of you, this behind-the-scenes giant of Imagineering is the first person who comes to mind.

It’s been a few weeks since Tony announced that he was stepping down from his position as Senior Vice President for Creative Development at Walt Disney Imagineering and reactions have run the gamut from anger to sadness. Tony Baxter has left his mark on the hearts of millions through his designs, his ideas and his imagination.

But who is Tony Baxter and what has he done in the past 47 years?

Travel back in time with me to 1965. There’s a young teenager working at Disneyland; sweeping footpaths, scooping ice cream, and operating a ride or two. He’s working hard to help pay for his college degree in Theatre Design from California State University in Long Beach, California. Starting with that simple cast member position, he would have the same employer for the rest of his life. Having graduated in 1969, he presented Walt Disney Imagineering (originally known as WED Enterprises) with a portfolio including a model of a “Marble Maze”. WDI, impressed by the maze’s precision, gave this young man a job. That young man’s name was Tony Baxter.

Tony’s first assignment as an Imagineer was to work on Walt Disney’s newest project which was not in Anaheim but in Florida, where “the blessing of size” provided plenty of room for the creations of WDI. The Walt Disney World resort opened in 1971 and, with such a large canvas, it’s no wonder that Tony’s talent and vision shined so brightly.

His first big step came in the mid-70s back at Disneyland in California when he designed a concept model for a new attraction with sort of western theme – a runaway mine train. In 1979, Tony’s model of that attraction became a reality when Big Thunder Mountain Railroad first delighted Disneyland guests. Today guests in California, Florida, Tokyo, and Paris continue to experience and enjoy the thrills of an attraction that started as Tony’s model.

The 1980’s parlayed Tony’s success into a more active role within Disney. 1983 saw a complete overhaul and redesign of Disneyland’s Fantasyland. The overall renaissance theme and architecture was changed and replaced with colors and textures of a Bavarian village, thus invoking thoughts and feelings of a true fairytale among guests.

All of this took place under the direction, oversight, and supervision of Tony Baxter.

With such a positive reception, this design standard was repeated and copied at Disney theme parks around the world, proving that Cogsworth knew what he was talking about when he said, “If it’s not baroque (broke), don’t fix it.” That same year, Tony led the creative efforts that brought us the Journey Into Imagination pavilion (now Imagination!) at Epcot.

One day while driving to work, Tony began to brainstorm on an attraction that would bring more guests to Disneyland’s less popular Bear Country (now Critter Country). The light bulb above his head flickered on and the idea for Splash Mountain began to take shape. In 1989 one of the most expansive projects in Disney Theme Park history opened and the first guests took the plunge into the Briar Patch. Two more versions of Splash Mountain now exist at Walt Disney World and at Disneyland Tokyo and all three continue to draw long lines of excited guests.

Even in light of all of this success, 1989 was a trademark year for Tony Baxter. Not just because of Splash Mountain, but because he was named Senior Vice President of Concept, Development, and Design in time for the design of Disneyland Paris which opened as Euro Disneyland in 1992.

The 1990s brought continued success for Baxter. Following in the successful footsteps of the Indiana Jones Epic Stunt Spectacular, another Indiana Jones based attraction was developed and created at Disneyland. The Indiana Jones Adventure: Temple of the Forbidden Eye was designed and constructed by a well-oiled machine of some 400 Imagineers led by Tony Baxter.
In 1998, Tony led a creative team to redesign Disneyland’s Tomorrowland area. The latter parts of Tony’s amazing career have seen the opening of the Finding Nemo Submarine Voyage, the reopening of Captain EO, and the redesign of Star Tours.

On February 1st of this year, Tony informed his fellow Imagineers via an open letter that he would be stepping down from his current role and into an advisory position. He’ll still be an influence – just not a full-time one.

In his 47 year career, Tony Baxter created numerous enduring Disney classic attractions, redesigned others, brought smiles to the faces of people on other continents, and creatively designed an entire Disney theme park, all of which beg to answer just one question: What have you done lately?

[quote]“It has been a wondrous 47 years spanning the opening of Walt Disney World to Big Thunder Mountain Railroad and Star Tours, from Epcot’s original Journey into Imagination to Disneyland Paris and Indiana Jones Adventure. The Imagineers I have known and shared these times with have provided invaluable experiences not to be found anywhere else on earth. The future of Imagineering and Disney Parks is incredibly bright.” – Tony Baxter[/quote]