Since the cancellation of the Hyperion Wharf project for Downtown Disney some time ago, we have all been wondering what will be happening to what is now Pleasure Island. Well… we may not have to wonder any more… 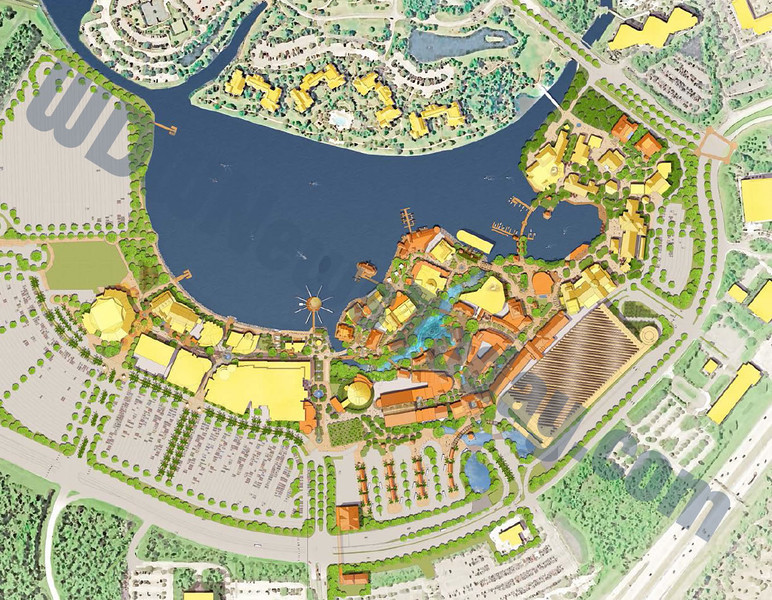 A few days ago, an unnamed source provided us with a PDF document referring to the overhaul of Downtown Disney by a project name which we will not be disclosing at this time. The project includes changes to the entire Downtown Disney district as we know it, including a rumored change to the name “Disney Springs”. According to the document, “The roots of this destination can be traced back as it evolved around the town’s local spring. In this evolution, clear changes in the environment have manifested, making what we know today as [Disney Springs].” 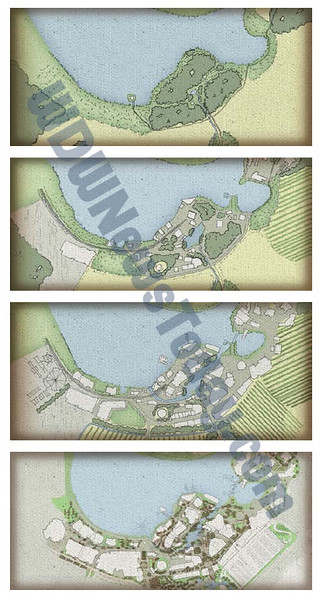 That evolution can be seen in the above image. The new backstory covering all of the area has the districts blossoming around a spring somewhere in the state of Florida. If you look closely, you can see train tracks constructed and removed, various structures go from a temporary to a permanent look, and the entire area expand into the complex as it may exist in just a few years time.

The document goes on to talk about three districts at “Disney Springs” including West Side, The Village Marketplace, and The Town Center. West Side is what we now know as Downtown Disney West Side. In the new backstory for this area, “The West Side was home to a fishing lodge and a campsite for musical gatherings of the brave souls of pioneer Florida. The elevated train tracks would connect [Disney Springs] to the coast and beyond. The larger structures date from America’s postwar prosperity host a variety of dining and entertainment.” 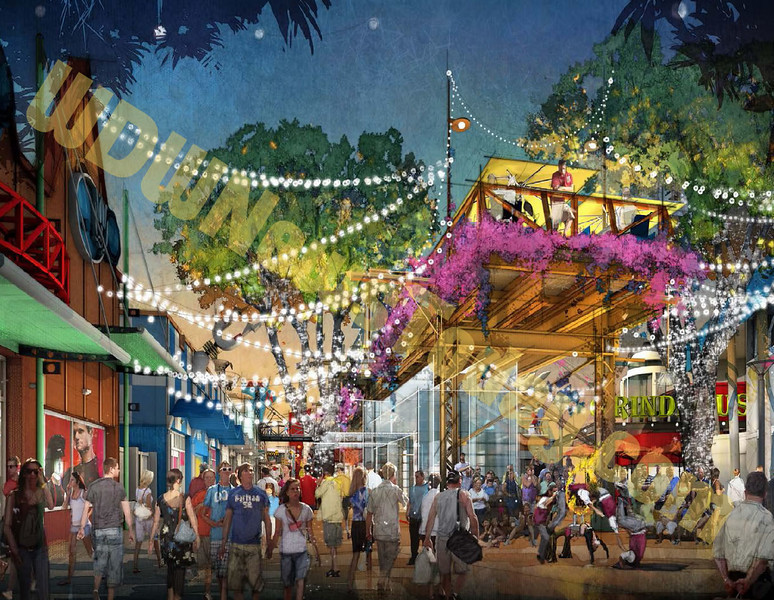 As you can see in the concept art above, the remains of the elevated train tracks will be constructed, possibly offering a second level patio where older guests can drink and dine while they watch shoppers pass on the ground below.

This elevation artwork shows guests meandering below the train tracks covered in shrubbery. We are not sure what the building on the right might be…

According to these plans, Downtown Disney Marketplace will be renamed The Village Marketplace. The backstory for this area states: “An upscale neighborhood, now dubbed The Village Marketplace, developed to the east. The meandering streets of the original plan and the mature trees and native flowers that line them make this a truly pedestrian friendly environment, for the modern day perambulators.” 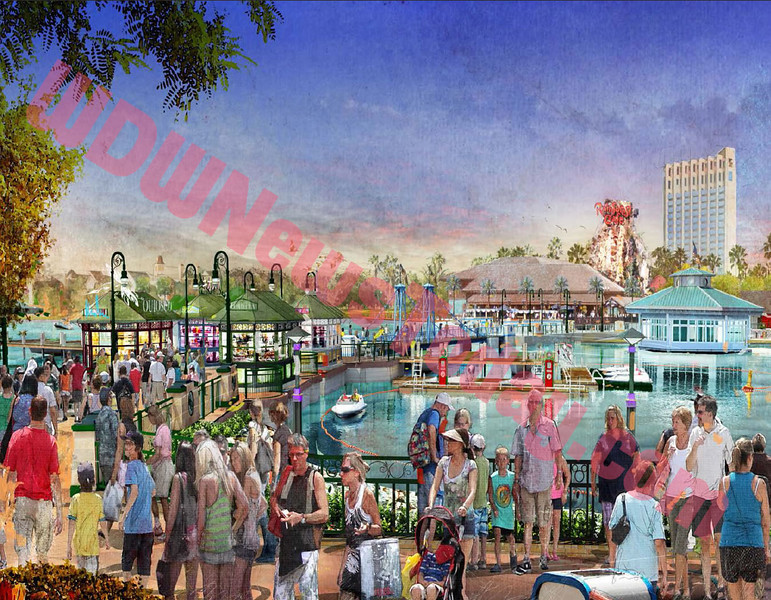 In the concept art above, you can see a new bridge that will connect the two sides of the Marketplace, stretching roughly from where the LEGO Imagination Center is to Rainforest Cafe on the other side.

Some elevation artwork for The Village Marketplace section is featured above.

The final section occupies what is currently Pleasure Island and its adjoined parking area. This new section is called The Town Center. This section will expand to include new structures using land freed-up by building a new bus loop and multi-level parking structure. According to the backstory, “As [Disney Springs] flourished, a handsome commercial district expanded to the south known today as the Town Center. Today the sophisticated shopping area rivals all local offerings but it is the comfort from its landscape and the calming effects of its fountains and shallow pools that beckon its guests to linger, and most importantly return.” 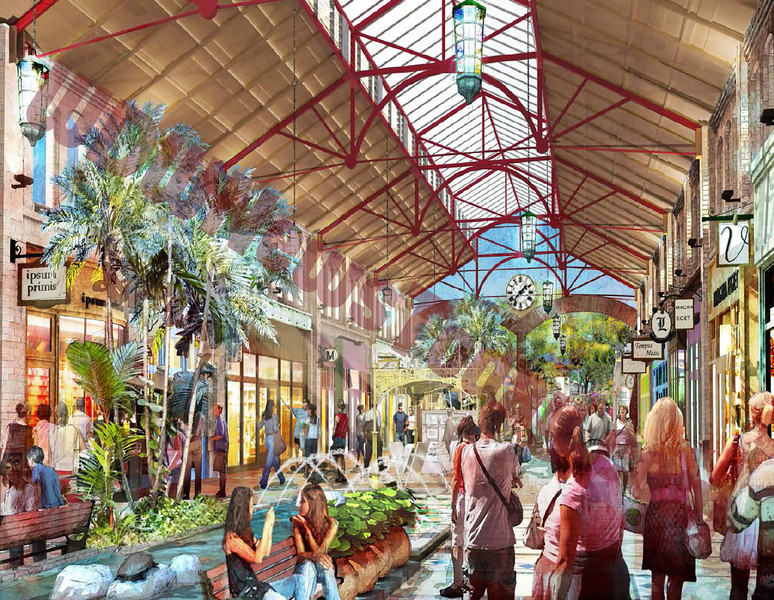 The above concept art depicts the interior of one of the new buildings in this area of “Disney Springs”.

Some elevation artwork showcases collections of shops with shrubbery and a large covering between them. 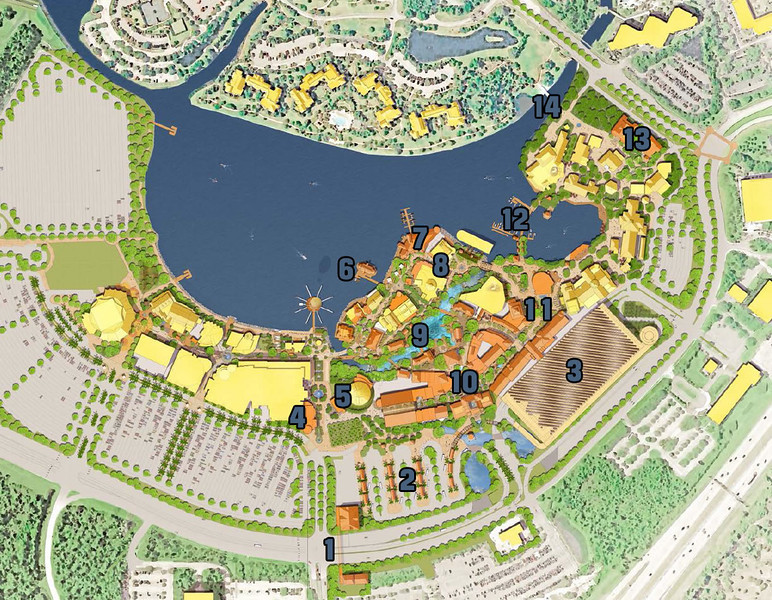 To better illustrate the planned changes to the districts, we have labeled the map overview of the project and pointed out some of the more important changes:

Now, as always, it is important to mention that none of this is official. This project may or may not happen (just like Hyperion Wharf, which still never took shape even after an official Disney announcement). However, according to the documents, this is the current plan for the Downtown Disney area at the Walt Disney World Resort.

So, what do you think of the plans for “Disney Springs”? Is this the best way to fix Downtown Disney at Walt Disney World?