By Erin Glover on the Disney Parks Blog:

If you’ve visited Disneyland park recently, you may have noticed that Fantasy Faire is quickly taking shape next toSleeping Beauty Castle. Opening this spring, Fantasy Faire will not only be a home for Disney princesses, but it will also be a natural extension of Fantasyland. To find out how the look and architecture of this new area will be designed to flow with Sleeping Beauty Castle and Fantasyland, I went to the creative lead for the project: Michel Den Dulk, Creative Director, Walt Disney Imagineering. 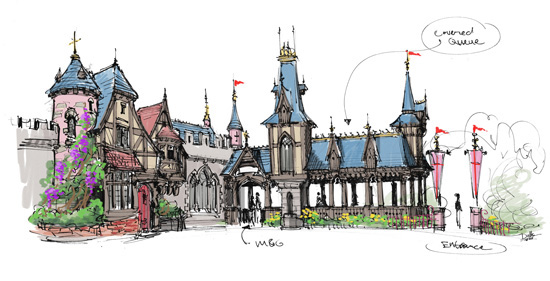 “My goal,” he said, “was that the new Fantasy Faire would meld over into the existing Fantasyland naturally.” He said that his intention would be for first-time visitors to never suspect that this addition came later than the rest of Fantasyland.

“I took a lot of inspiration from the classic Disney movies like ‘Pinocchio.’ There’s some reference that’s in the architecture to the way the backgrounds of ‘Pinocchio’ are drawn. I took inspiration from the castle – you’ll see that there’s a lot of gold finials and beautiful banners and turrets that are similar to Sleeping Beauty Castle … So it really looks like it’s all part of the existing Fantasyland.”

Another key piece of architecture in Fantasy Faire will be the Royal Theatre, which was the former Carnation Plaza Gardens Stage. “My main inspiration there,” Michel explained, “was a Gothic kind of fair. King Arthur Carrousel and all the structures surrounding Dumbo – those were the main inspiration for the theatre structure.”

We’ll have more updates on Fantasy Faire – including the opening date – here on the Disney Parks Blog in the coming weeks, so keep checking back!