When we last spotlighted Boston artist Howie Green, he was getting ready to begin his “Golf Balls on Parade” project. He has been busy in 2013. Let’s take a look… 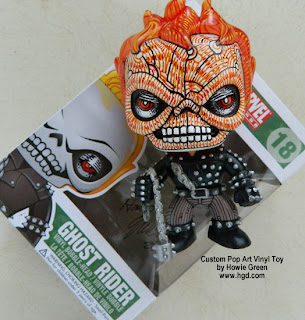 – Finished up the design for my second production figure for Trail of the Painted Ponies scheduled for release this Fall but which is still top secret since it involves an infamous TV actress/celebrity.

– Completed two large mural painting projects with several hundred volunteers from the Boston Red Sox Foundation (including players, coaching staff, and managers John Farrell and Ben Cherington) at the Washington Irving School and Dimock Center in Boston, MA – even had a visit from the Sox official Mascot, Wally the Green Monster.

– Painted the 3 in a series of 4 giant golf balls in Rochester, NY for the upcoming Golf Balls on Parade event at the PGA Tournament at Oak Hill Country Club this Summer. I’m returning to Rochester soon to paint the remaining 1.

– Published a book of over 300 of my album cover paintings

As always thanks for your support and I’ll keep you posted.