The Disney Vinylmation Events page was updated to include an April 12th release date for Animation 3. While we do know the identity of half of the 12 figure mystery set and a few of the LE combos, the biggest reveal from this update was the combo topper. No photos as of yet, but it was revealed to be none other than Thumper from Bambi!

I can not wait to see what this figure looks like. Similar to the Classic Collection’s Oswald, it will be a let down if Thumper does not have the bunny ears instead of the Mickey ears. I think it also needs the cotton tail that we saw on the 2012 Easter Bunny figure. 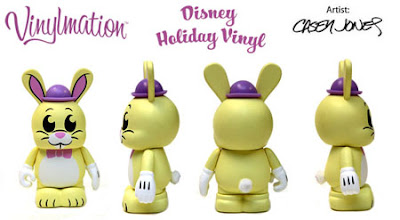 By the way, Thumper is designed by Casey Jones… who also designed the Easter Bunny figure above. So I think it is a safe bet we will see the Bambi bunny on a similar platform! Thumper joins his buddy Flower from the 1942 Disney animated classic who appeared in Animation Series 2 last year.

You can find the series as we know it on our explained page here. What figure are you most excited about?