Update: 4/2/13 This was our April Fool’s joke. However, just think how easily something like this could happen. hmm…..

Disney has put an indefinite halt on guest pin trading with Cast Members at all Disney parks after a guest was injured at Hollywood Studios in Orlando on Sunday. Read the full story at our sister site Once Upon a Pin. 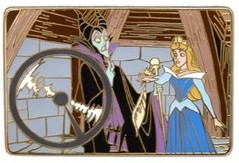 With pin trading put on hold, is Vinylmation trading far behind?

2012 Nick and MC quit the podcast. Annemarie and Zoe take over.

2011 Our version of the Nerds Rock Stitch

Merchandise
Once Upon a Pin, Pins