Disney has released info about the first of the four variants for Park Starz 2. It will be a glow in the dark Tower of Terror Bellhop. 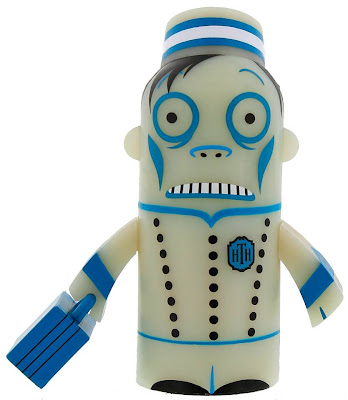 He will be released at D-Streets on June 28 for $24.95 and will have an edition size of 2,000. I understand what the artists are going for with the glow in the dark, but I personally think figures like this (and the Haunted Mansion variants) are overkill and bland. They look cool with the lights off, but don’t look appealing when viewing a collection. Don’t get me wrong, the common version of this figure is absolutely amazing, I’m just not a big fan of the all over the body glow in the dark. I like spot uses of it on a figure instead.

Also, Vinylmation Exchange posted a leak about what the other three variants will be. Remember, until Disney confirms it, the following is just rumor. Remember, Disney did give us general release windows, edition sizes and prices for all of these, but a member on VE has named them.

What could these be? The Red Head and Skeleton combo really stumps me. What is a valid variant of the Red Head? Pre or Post auction? Gus should be a clear version like the Park Starz 1 Bride. And as far as Carnotaurus, a comment made by a visitor to our site months ago may actually come true… a fossil version!